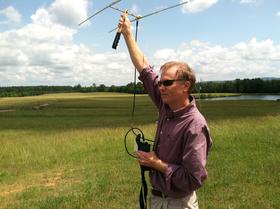 They’re larger than foxes and travel in ones and twos. And if you live in one of Atlanta’s wooded neighborhoods, then it’s possible that you’ve spotted a coyote near your house, or heard its wild call… which sounds something like this.Coyotes howling on the Berry College Campus

Now a new survey by Berry College wants to know about your coyote encounters, Atlanta.

Biologist Chris Mowry is heading up the survey, which is the first part of what he hopes will be a long-term coyote study of intown coyotes, the first of its kind conducted here.

WABE’s Kate Sweeney sat down to talk with him about why they’re doing this study now, which neighborhoods are seeing a high coyote count, and the widespread misconceptions people tend to have about these wily creatures.Broadcast version of interview that aired Wednesday, December 3, 2014

In this extended version: More on similar studies taking place around the country, and the fascinating story of how the coyote replaced the red wolf in north Georgia’s food chain.Extended version of Kate Sweeney's interview with biologist Chris Mowry

Here’s a link to video caught by the Chicago “coyote cam” Chris Mowry talks about in the extended interview. If you have your own story of hearing or spotting a coyote in your Atlanta neighborhood, you can fill out the Berry College survey here.