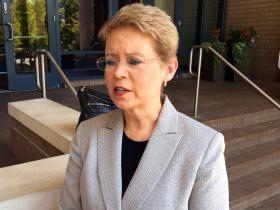 A local watchdog group has filed a complaint with the Georgia Inspector General’s Office, asking for an investigation into two of Gov. Nathan Deal’s top staffers over an ethics investigation.As heard on the radio

The group Georgia Watchdogs, a coalition of watchdog groups from across the state, says the complaint stems from a recently revealed 2012 memo from State Ethics Commission Chief Holly LaBerge.

In the memo – and in testimony to Fulton County Superior Court Judge Ural Glanville Monday – LaBerge said she felt pressured by Deal’s Chief of Staff Chris Riley, now with the campaign, and staff attorney Ryan Teague to settle an ethics investigation into Deal’s 2010 campaign.

Georgia Watchdogs head Sabrina Smith says if Riley and Teague were conducting official state business when they contacted LaBerge, or were using any state resources, such as a state-issued phone, it’s a violation of state law.

LaBerge has said Teague called her personal cell phone while she was on vacation in July 2012 and issued the threat. She said she later exchanged texts with Teague and Riley.

Deal’s office has denied the two threatened LaBerge, and said the memo shows the governor’s legal team strongly advocating on his behalf.

“Repeating something that’s not true doesn’t make it true, no matter how often you repeat it,” he said.

Robinson said Teague and Riley used their personal phones, not state issued ones, to contact LaBerge about the investigation. He also disputed the timeline of events laid out in the complaint, pointing to a claim that LaBerge received a letter of recommendation from the governor’s office for another position during the investigation into Deal. Robinson said the letter was sent “long after the case was closed.”

“You must walk away with the impression that the accuser didn’t take this too seriously,” Robinson said.

Lawyers for former state ethics commission chief Stacy Kalberman have accused the state of illegally concealing key information, including the memo, in the lead up to her whistleblower trial. Kalberman won the case earlier this year after alleging she was forced from her job for investigating Deal’s 2010 campaign.

Judge Glanville has said he’ll decide by week’s end whether the state attorney general’s office, the ethics commission and LaBerge should be sanctioned for not turning over the documents.