The Georgia Water Coalition has released its dirty dozen report. The list focuses on the twelve worst offenses to the state’s waterways. 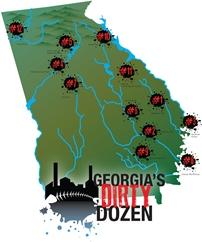 The Ogeechee River tops the coalition’s list for the second year in a row. The river was the site of last year’s massive fish kill that was blamed on discharge from a textile manufacturer. A year later, Executive Director of the Ogeechee Riverkeeper Emily Markesteyn says not much has changed.

“Here we are twelve months later and we still have an industry directly discharging into the Ogeechee river without a permit.”

The number two spot goes to a hazardous waste site near Atlanta’s Hartsfield-Jackson International Airport. Coalition members say the site is contaminating soil and ground water and could pollute the South River watershed. Joe Cook with the Coosa River Basin Initiative says the state legislature has diverted more than $86 million dollars since 2004 from a fund meant to clean up the site and others like it.

“Meanwhile the site, which is one of 560 known hazardous waste sites in the state, builds a toxic stew linked to brain damage and reproductive dysfunction into our environment.

The coalition is also concerned about two new nuclear reactors being built at Plant Vogtle near Augusta, which it says threaten the health of the Savannah River.  The Coalition says funding cuts to the state’s Environmental Protection Division, political cronyism by the governor and his administration and the wasteful use of state tax dollars are responsible.

A spokesman for Governor Nathan Deal says the coalition is not objective but a liberal interest group. In a statement spokesman Brian Robinson says, “The Deal administration has sought a balanced approach as we continue to face tough choices in the budget, even in high priority areas. Georgia has accomplished much on conservation in recent years and Gov. Deal’s water supply plans will prepare our state for its population growth needs through 2050. A steady and reliable water supply is crucial to Georgia families and Georgia business, and Gov. Deal is working hard on that.”