More and more Americans are leaving the suburbs behind in favor of urban spaces. As we’ve discussed in past stories, this national trend holds true here in Atlanta, too.

But what happens to those empty suburban spaces—the strip malls, office parks and sprawling parking lots

—left behind by this mass urban migration? And can we improve upon those spaces  for the folks who still choose to live there?

Continuing a conversation we began with Darin Givens of the ATL Urbanist blog, we sat down with Ellen Dunham-Jones, a Georgia Tech professor of Architecture and Urban Design whose TED Talk on the topic, “Retrofitting Suburbia,” went viral.

The first obvious question to ask seemed to be why suburbs need to be “retrofitted” in the first place. In part one of this interview, WABE’s John Lemley began by asking why so many of the landscapes that nurtured the baby-boom generation are dying off.

Part one of interview that aired Wednesday, August 6, 2014

In part two of this interview, Ellen Dunham-Jones and John Lemley discuss the innovative methods by which different communities have retrofitted their aging suburban structures—including a few here in Atlanta.

Ellen Dunham-Jones made a presentation about repurposing suburban sprawl at TEDxAtlanta.  You can watch her presentation here.

We have long been interested in the growth of the Atlanta region and its consequences, so for more information please check our previous stories about sprawl.

And to give you an idea of just how far the Atlanta region stretches, here’s a photo of our region at night from the International Space Station. A good way to get an idea of the size of the area is to look at the distance from downtown to Hartsfield-Jackson Airport, which is toward the lower left. 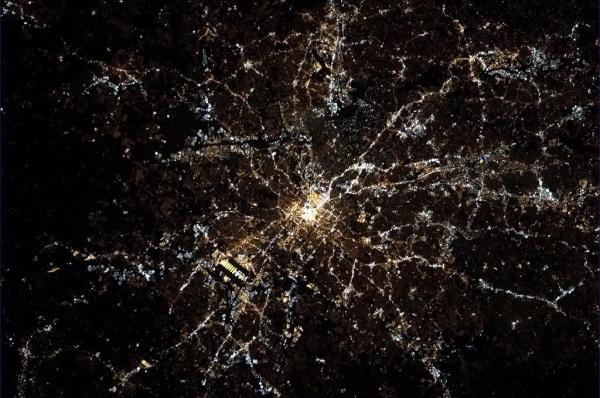