Every state has laws requiring that students get vaccinated, with exemptions varying from state to state. All states provide for medical exemptions to vaccines, and all but two allow religious exclusions.

But unlike 19 other states, Georgia does not permit vaccination exemptions for philosophical reasons.As heard on the radio

“We have a very low exemption populous, so we feel really good about maintaining our herd immunity,” says Penny Conner, who works in immunization at the Georgia Department of Public Health.

Herd immunity is when most people are immunized against a disease, creating less opportunity for a virus to spread to those who aren’t vaccinated. Conner estimates Georgia’s exemption rate to be less than 2 percent of the population. 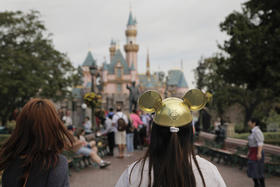 The issue has sprung up in the wake of a measles outbreak that originated in December at California’s Disneyland theme parks. So far the state has seen 59 cases, the majority of which have been traced back to the initial exposure. Officials were able to confirm vaccination status for 34 of those cases, of which 28 weren’t vaccinated.

According to CDC data, 94 percent of Georgia’s enrolled kindergartners have gotten the recommended two-dose MMR vaccine, which protects against measles. In its annual National Immunization Survey, the Centers estimates about 92 percent of the state’s children age 19-35 months have received at least one does of the vaccine.

The CDC’s Greg Wallace says while vaccination rates have remained relatively stable in the U.S. – the California outbreak shows a new trend.

“If the exposure gets into the right community, you are seeing larger outbreaks than we’ve seen in the last 15 years,” he says.

Measles was considered eradicated from the U.S. in 2000, meaning while the disease exists in other countries, it no longer spreads continuously here. The disease is still common in most of the world, so those cases that do occur in the U.S. are usually brought into the country by travelers.

But U.S. outbreaks have been growing. Last year, 644 measles cases were reported in 27 states, the most on record since the early 1990s. The majority of those who caught the disease had not been vaccinated.

Both Conners and Wallace say the only way for people to protect themselves is to get the recommended vaccine.