Education buzzwords are tossed around in public discussions, especially in election years.  One of those terms is “school choice.” But what does it mean exactly?

Like a lot of terms used by politicians and public figures “school choice” can mean different things to different people.  Georgia Partnership for Excellence in Education president Steve Dolinger says the definition can cover a range of educational models.

“It can be anything from a local school system that decides to convert one of their schools to a charter status and have some interesting things happen at that school,” Dolinger says. “There are laws on the books that allow students to transfer within a school system.” 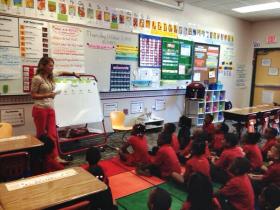 Dolinger says other “choices” include magnet schools and districts that convert to charter systems, which generally gives them more flexibility. In some states, vouchers are popular. That’s where parents, unhappy with their public school, can receive state-funded vouchers for private school tuition. Dolinger says Georgia has its own version of that.

“With the Georgia private school tax credit law, there were Student Scholarship Organizations that were created that could be a mechanism to flow tax dollars from both corporations and individuals that could go [to SSO’s then back] to students to attend a private school.”

Dolinger says Georgia has been open to providing a variety of educational choices for parents.