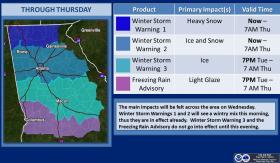 Below are announcements, warnings, and alerts regarding the approaching winter storm.  Yesterday we posted announcements from a number of area schools and other organizations about their plans for today.  Here we are continuing to list new information as it comes in to the WABE newsroom.

National Weather Service:  NWS meteorologist Laura Belanger just told Denis O’Hayer that the metro Atlanta are can expect 1/3 inch of ice accumulation at a minimum, and probably closer to 1/2 inch. Also, the storm will bring with it wind gusts of 20 to 30 MPH.  This almost certainly means that tree limbs and power lines will be falling in the metro area.  However, the eastern side of the state, especially around Augusta, is really Ground Zero for this storm.  Augusta can expect at least a full inch of ice, maybe more.  The northeast Georgia mountains can expect between nine inches and a foot of snow.  The interview is packed with the latest weather information, and we will be posting the complete audio shortly.

Mayor Reed PSA:  Atlanta’s mayor Kasim Reed has uploaded a public service announcement about the winter storm.  Mayor Reed asks Atlantans to avoid being on the roads as much as possible because of the hazardous conditions.

GDOT:  The Georgia Dept. of Transportation is asking motorists in northwest Georgia to stay off the roads as much as possible for two more days.  GDOT is working to treat icy road conditions on a number of highways in that part of the state, and the situation is only going to get worse overnight.

MARTA:  We have just received a statement from MARTA which says that on Wednesday, Feb. 12, MARTA will cancel all bus and Mobility (paratransit) service due to hazardous road conditions.  Rail service will operate on a weekend schedule.  Rail service will begin at 4:35 a.m. with trains running approximately every 15 minutes on all lines until about 2 a.m. on Thursday.  To provide comfort and shelter, some buses will be deployed as “warming stations” at various locations for motorists, truckers and others.

Fulton County:  the county is opening some shelters for homeless citizens during this storm.  Here are the details:

The Fulton County Office of Emergency and Transitional Housing (OETH) is prepared to provide shelter for homeless citizens during the predicted inclement weather of snow/ice.  In the event of ice, snow, and temperatures below 40, Jefferson Place Transitional House for men and Springdale Place Comprehensive Services Center for Homeless Women with Children will provide emergency beds for those without shelter. Jefferson Place has overflow space for 75 men and rooms for women with children are open at Springdale place.  OETH is keeping the County’s community partners informed of the available spaces for men and women with children.

Citizens in need of shelter can call 404-613-0412 or email OETH Division Manager Leonard Westmoreland at leonard.westmoreland@fultoncountyga.gov . OETH is a division of the Fulton County Housing and Human Services Department.

GEMA:  Gov. Nathan Deal and Mayor Kasim Reed are taking part at this hour in a press conference on the storm preparations.  Gov. Deal said that they have learned that the ice storm will also contain gusty winds, adding “That is not good news for us.”

Michell Eloy is covering and will provide a report later, but in the meanwhile she tweeted this picture. 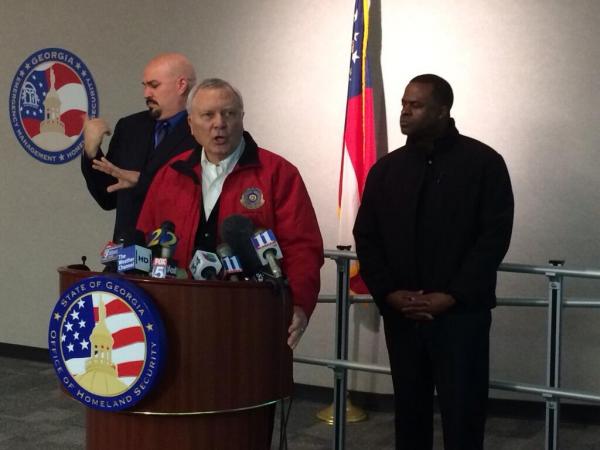 Centers for Disease Control and Prevention:  the CDC’s Atlanta-area campuses will be closed on Wednesday, Feb. 12.

Atlanta:  there is a thorough list of shelters, emergency numbers, and storm-related information that has been collected in one place on the City of Atlanta’s web site.

National Weather Service:  The latest projections of snow and ice amounts to expect — and where to expect them — shows that the storm will hit hardest to the east of Atlanta roughly between I-85 north and I-16 south of Macon, centered along the I-20 corridor.  Augusta may get more than an inch of ice, while Rabun County and the northeastern corner of the state could get more than nine inches of snow.  The NWS continues to use words like “catastrophic” and “crippling” to describe this storm. 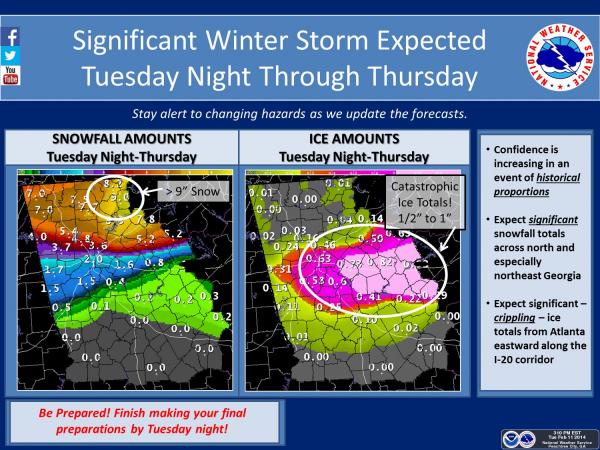 Johns Creek:  City Hall, Municipal Court and other city facilities will be closed on Wednesday, Feb. 12.

University of Georgia:  UGA will be closed on Wednesday, Feb. 12.

Kennesaw State University:  KSU will be closed on Wednesday, Feb. 12.

DeKalb Board of Education:  the personnel hearing scheduled for Wednesday, Feb. 12, has been canceled and will be rescheduled.

Fulton County:  the Fulton Co. Board of Registration and Elections meeting scheduled for 10:00 a.m. Thursday, Feb. 13, is not being canceled and will go on as scheduled.

Fulton County:  county facilities will be closed Wednesday, Feb. 12.  Courts in the Atlanta Judicial Circuit will also be closed.

Governor’s Press Conference:  Michelle Wirth was covering Gov. Deal’s press conference about the state’s readiness for this storm.  We have embedded some of her tweets below.

Gov. Deal says second round will be much worse than what residents saw today in Metro Atlanta. #wabenews— Michelle Wirth (@wabewirth) February 11, 2014

Georgia Power official says people should be prepared to be without power for days. #wabenews— Michelle Wirth (@wabewirth) February 11, 2014

Gov. Deal says those in need should call 911 if there is an emergency. #wabenews— Michelle Wirth (@wabewirth) February 11, 2014

Gov. Deal says storm is not restricted to metro Atlanta but will extend east of here to Augusta and the state line. #wabenews— Michelle Wirth (@wabewirth) February 11, 2014

Alpharetta:  offices for the City of Alpharetta will remain closed Wednesday, Feb. 12.  The city is opening several facilities as shelters during the storm, and they have posted a list of these locations.

National Weather Service:  This weather map was tweeted by NWS.  Just a reminder of how dangerous this storm could be.

Forsyth County Schools:  will be closed on Wednesday, Feb.12 — all extracurricular activities are also canceled. No decision yet about  Thursday, but the school system says the schedule for this coming weekend is not changing.

GEMA:  Gov. Deal is currently meeting with members of his emergency response team.  WABE Michelle Wirth tweeted this picture.  There will be a press conference at 3:00 p.m., and we’ll be there.

Morehouse College:  Morehouse has just closed for the day and will remain closed Wednesday, Feb. 12.

AAA:  wants to remind motorists during this winter storm to conserve their cell phone batteries by turning off phone functions that they aren’t using; WiFi, GPS, camera, Bluetooth and other hands-free features are just some examples.  Use ringtones instead of setting your phone to vibrate, and limit the use of the phone’s display as much as possible.  If you are in an area with no cell signal, turn your phone off until you reach an area where there is a signal.  They also recommend turning off your phone unless you are expecting a call.  AAA points out that the last winter storm resulted in many motorists stranded in their cars with cell phones that were running out of power.

Oglethorpe University:  Oglethorpe will close at 4:00 p.m. Tuesday afternoon, Feb. 11, and will be closed Wednesday, Feb. 12.

Agnes Scott College:  will be closed on Wednesday, Feb. 12.

Spelman College:  Spelman has just closed for the day and will remain closed Wednesday, Feb. 12.

Atlanta City Government:  all City of Atlanta offices will be closed on Wednesday, Feb. 12, including all Parks and Recreation facilities and Municipal Court facilities.

Henry County Schools:  students will be released from school today on their normal schedule, but all extracurricular activities have been canceled. All Henry County schools will be closed on Wednesday and Thursday, Feb. 12 and 13.  Makeup days will be determined later, but the February Break scheduled for next week will not be affected.

AT&T:  AT&T has taken steps to protect its cellular network by making sure cell towers have generators with enough fuel to keep them operating even if the regular power goes out.  During the storm, they ask that people not talk unnecessarily on their cell phones and to send text messages instead of calling.  Storms often generate high call volume, and too many calls may trigger the “fast busy signal” indicating the system can’t take your call at that moment.   The company also says that it is prepared to respond quickly to repair damaged telephone land lines, but that it is very likely there will be some service interruptions.

Georgia General Assembly:  both the Georgia Senate and House will be “in adjournment” from Wednesday, Feb. 12, through Monday, Feb. 17, at 10:00 a.m.

Brenau University:  the Gainesville, Norcross, and Fairburn campuses of Brenau will be closed through Wednesday, Feb. 12; all classes and other activities are canceled.

Fulton County:  Fulton Co. has posted a list of fire stations that will be available as warming sites and temporary shelter for residents and stranded motorists during the storm on their Facebook page.

Georgia Gwinnett College:  GGC has canceled the rest of classes today, Feb. 11, and will be closed Wednesday and Thursday, Feb. 12 and 13.  A decision regarding opening on Friday will be announced by 3:00 p.m. Thursday afternoon.

GDOT Plan For Treating Ice On Highways:  GDOT has indicated that they will only be treating the two right-hand lanes in each direction for ice. GDOT spokeswoman Karlene Barron said that with over 4,000 miles of highways in Georgia, this limitation will allow them to be able to treat as wide an area of the state as possible.  Interstate highways will be the first to be treated for ice, followed by heavily-traveled state roads. Roadway signs, where available, will direct traffic onto the treated lanes.

MARTA:  on Tuesday, Feb. 11, MARTA is running its regular schedule of buses and trains. This may change with weather conditions, so be sure to check the MARTA website when making plans.

Georgia Tech:  Tech will be closed on Wednesday, Feb. 12.

Emory:  Emory University will be closed tomorrow, Feb. 12.  The Emory Clinic is open today but will also close tomorrow.  Emory Healthcare remains open, as are most hospitals.

Emergency Contacts:  The Atlanta Police Foundation has posted a good list of emergency numbers, locations of shelters, and other information on how to prepare for the storm.

Georgia Power:  in case of a power outage, you can report it to Georgia Power using your smart phone, tablet or any web-capable device (advance registration recommended).  You can also view a real-time map of power outages in Georgia Power’s service area.

DeKalb County Schools:  schools will be closed Wednesday, Feb. 11.  The school system provided a list of online instructional resources for students, parents and teachers to use.

Georgia Emergency Management Agency:  GEMA has put together an interactive map of available shelters in the metro Atlanta area.

State of Georgia:  state government workers living north of I-20 and outside of I-285 have been allowed to go home.  Other state employees not involved in storm preparations will be released at noon.

Centers for Disease Control and Prevention:  the CDC’s Atlanta-area campuses are closed today.

Georgia Department of Labor:  GDOL offices in the Atlanta area will be operating normally today.  Offices in Blue Ridge, Cartersville, Dalton, LaFayette, and Rome will open at 10 a.m. today.

Georgia Emergency Management Agency:  Below is a link to the “GEMA Minute” news broadcast