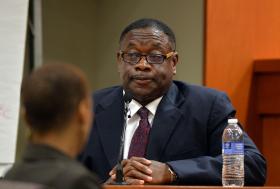 Two major DeKalb County corruption cases are in jeopardy. Part of the reason is the prosecution’s star witnesses have struggled with credibility issues.

It’s a constant dilemma for prosecutors – how much to rely on witnesses with questionable character.

DeKalb CEO Burrell Ellis is accused of shaking down county contractors for campaign donations. During the trial, DeKalb’s former purchasing director Kelvin Walton was the state’s star witness. Walton cooperated with prosecutors only after being caught accepting gifts from contractors and lying under oath.

“I’ve done a lot of bad things and I’ve let a lot of people down but as you hear my testimony today you’ll realize I didn’t do this stuff by myself,” said Walton last month during his first day on the witness stand.

Some jurors, however, reportedly found him untrustworthy and took issue with him betraying his boss. The case recently ended in a mistrial.

Caren Morrison, a former federal prosecutor who now teaches at Georgia State University’s law school, says putting someone on the stand with a questionable past can be a gamble.

“A lot of the time you don’t have a choice because they’re the only people close enough to the action to put everything in context, give background information that you would not otherwise be able to get,” said Morrison.

She says prosecutors consider a number of factors before offering a plea deal – first and foremost the person’s credibility.

“The best you can do is just gauge how do they talk to you when you’re doing forensic interviews with them or trial preparation and just hope that they will be able to come across as candidly as they do with you,” said Morrison.

But it can backfire.

In 2010, DeKalb’s former schools chief Crawford Lewis was charged with racketeering. He eventually struck a deal with prosecutors to testify against two others in exchange for a reduced misdemeanor charge and probation. He testified and the two were convicted last year.

A judge, however, recently overturned those convictions. She found Lewis so untrustworthy and felt so strongly he should be jailed, she ordered a re-trial for the two who were convicted.

“It’s always easy to Monday morning quarterback,” said Emory University law professor Kay Levine. “When it falls apart it’s very easy to look back and say, ‘you should have thought this through more.’”

Levine says in general striking deals with those allegedly involved in crimes is a judgment call for prosecutors.

“I would assume staff (of DeKalb District Attorney Robert James) spent quite a bit of time thinking about this and decided to do it anyway. They took a risk. My guess is they knew that it was a risk and it simply did not pay off.”

Both DeKalb corruption cases can be re-tried. If the cases go back to trial, Levine expects Kelvin Walton and Crawford Lewis to feature far less prominently.