There’s no doubt new technology follows the trends, and a smart phone app released this week is no different: It allows users to rate their experiences with police officers, and it’s created by a group of teenagers from Stone Mountain.

Five-O was developed by Ima, Asha, Caleb, and Joshua Christian—and its release coincides with demonstrations, violence and police action in Ferguson, Missouri following the shooting death of unarmed black teenager, Michael Brown. Those events have seized the nation’s attention and raised questions about racial profiling and police brutality. 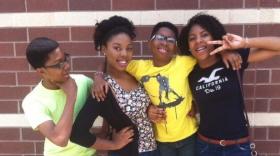 Host John Lemley sat down with WABE’s Michell Eloy, who reported on the new app this week. They discussed its relationship with the events in Ferguson, and what went into its creation. He began by asking her exactly how Five-O works.