This story is part of “Atlanta Remembers: The 1996 Olympics,” WABE’s series on the impact of the 1996 Summer Olympics on Atlanta, 20 years later. For more stories, click here.

Walking down Merritts Avenue, at the edge of Centennial Place, Renee Glover points out the townhomes with well-groomed landscapes.

“As you can see, it’s a beautiful community,” Glover said. “It’s quiet.”

Glover directed the Atlanta Housing Authority during the 1996 Olympics.

“This used to be Techwood Drive,” Glover said, looking at the street ahead. “We were able to get the City Council to change the name to Centennial Olympic Park Boulevard.”

The name change was necessary for the transformation, Glover said.

“Part of creating a new place is that we wanted to put some distance between the old bad history and the new history,” Glover said, “because quite frankly the properties would not be mixed-income communities if market-rate families didn’t choose to come live at the property.”

Many of the “market-rate families,” to which Glover is referring, wouldn’t come near this area when it was Techwood Drive.

The arrival of the Olympic Games, which rushed in a new policy for housing the city’s lowest-income residents, changed that.

“Techwood Homes was a place you would not drive through,” said Thomas Boston, a professor of economics at Georgia Tech.

Where Centennial Place is now was the nation’s oldest public housing, Techwood Homes. Boston said on his regular commutes from the Atlanta University Center he steered clear from the area. 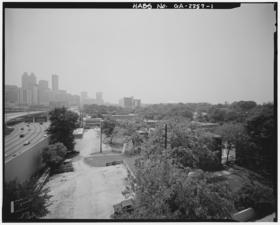 “It was just such a distressed and troubled and violent neighborhood that you avoided it,” he said.

Maintenance issues and drug violence were plaguing public housing around the country in the 70s and 80s, said MIT professor of urban planning Lawrence Vale. Atlanta especially struggled with the problems, he said.

“And certainly by the early 1990s the conditions in most of the family public housing were pretty atrocious,” Vale said.

Around that time Atlanta also knew it was getting visitors – a lot of them – for the 1996 Olympics. Techwood became the all-too-visible blemish.

When Glover took over the reins of the city’s Housing Authority in 1994, she did do something. She started the Olympic Legacy Program, a plan for redeveloping Atlanta’s public housing.

The first project to be demolished was Techwood Homes. The logic was it put too much poverty in one place. The housing authority wanted to start over with a new approach: a private development for a mix of incomes.

The market-rate units would bring the private investment to the neighborhood that the public housing project lacked, the logic went. Then families in the subsidized housing units at the development would get to benefit from the new amenities.

The first phase of the remodeled neighborhood, Centennial Place, was ready just in time for the Olympics.

Margie Smith was placed in an apartment at Centennial Place shortly after the Olympics ended. She had moved to Techwood Homes with her son in 1976.

“I was given a choice of a lot of complexes to move to. And I just picked Techwood Homes. Don’t ask me why I just picked that one,” Smith said. “And I’m glad I did.”

“We was family,” Smith said. “Even though we were public housing, we were a neighborhood, like any other neighborhood is.”

Now, the Techwood residents are scattered. Smith is just one of a small number who returned. Most, if they received assistance after the demolition, took vouchers and moved elsewhere in Atlanta or to the suburbs.

It’s why many researchers and housing advocates are critical of the Techwood turnaround story.

“The message is that we’ve transformed these people by fixing their neighborhood and their home,” said Vale, the MIT professor. “But the missing piece of that is that it’s not the same people.”

Vale, who chronicled the Techwood redevelopment in his book, “Purging the Poorest,” said the Housing Authority just moved many of those people out of the way.

“There was a fundamental disrespect for the kind of community that was in these places,” Vale said.

Glover, for her part, admits there would never have been enough room for all of the Techwood residents at Centennial Place. By design, no more than 40 percent of units are reserved for public housing.

The things surrounding Glover at Centennial Place – townhomes on a quiet street – which, she said, public housing residents couldn’t access before.

Whether these things really transform all aspects of the subsidized housing residents’ lives is still unclear. Case Western University professor Mark Joseph, who heads the National Initiative on Mixed-Income Communities, has studied this question in Chicago’s housing system.

“There are certainly anecdotes of families who are doing better,” said Joseph, while adding, “In our research, we’re not seeing a difference over time in the earnings and employment of those people who have been in mixed income developments.”

Still, in Atlanta, officials have stood by the mixed-income approach.

After the Olympics, the city, under Glover’s nearly 20-year reign, set out to transform the rest of its public housing projects, creating more than a dozen new mixed income communities. The model was Techwood.