In February, INRIX 2016 Global Traffic Scorecard reported Atlanta was the eighth worst city in the world for traffic with an average of 70.8 hours spent in congestion. Before Thursday, it would have been safe to assume that city’s traffic woes couldn’t get much worse.

But that was Atlanta BC: Before the collapse.

While three people have been arrested in connection with the fire that led to the collapse of an Interstate 85 overpass, crews have been working around the clock to assess damage and clear debris. A portion of I-85 remained closed as commuters were redirected to take alternate routes to bypass the wrecked area.

In town residents like Sidney Spear were working to reroute their commutes to work. She lives near Grant Park and works in Alpharetta. Her plan was to take Buford Highway but, since the connector was closed, she planned to use Interstate 75, get on Interstate 285-east, and then go north on Georgia State Route 400.

“All of those routes are 45 minutes for me barring traffic. But traffic will be even worse than it already is, I’m expecting an hour and a half to two hours,” she said “I still haven’t been able to check out back roads yet and think those all the way through, but I honestly can’t imagine that it’ll be much good for me anyways since I live in downtown and I’m already so far from 400.”

The connector has since reopened, which, along with school closings due to spring break, meant Monday morning’s commute was easier than many had thought it would be. 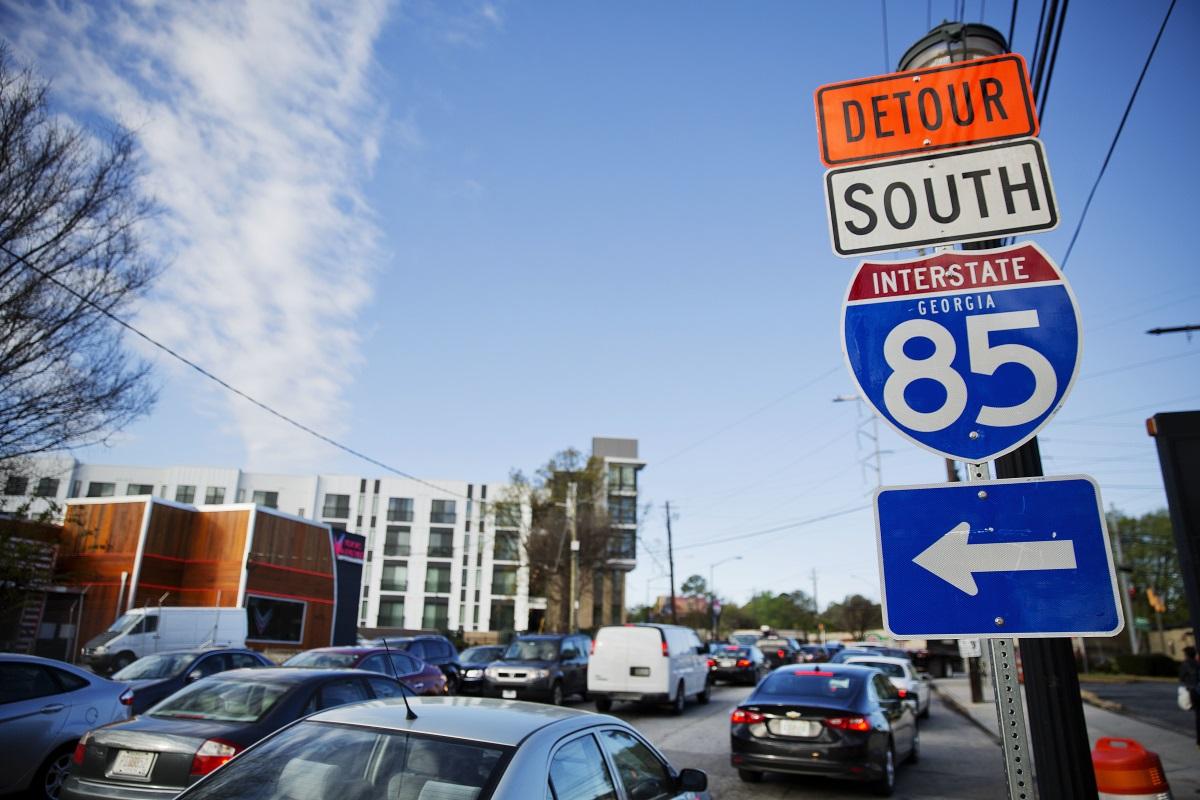 Commuter Randy Kessler said he left his home north of the city a tad earlier than usual, around 7 a.m., to drive into the downtown area. He said he didn’t experience any major traffic heading south, but saw more traffic going north.

“This is going to help in the long run,” Kessler told the Associated Press. “It reminds me of the [1996 Summer] Olympics when people were terrified about driving downtown, but it was lightest traffic ever. It made people carpool more. I think Atlanta needed a little kick in the butt. We needed something to change our habits to make us rethink our daily commute.”

Having to reroute commutes isn’t the only way some in metro Atlanta were affected by Thursday’s events. While there were no injuries reported, seeing the fire and collapse isn’t an experience Bobby Barnhart is likely to forget.

He recorded the saga from start to finish. His “Snaptraffic updates” comically guided Barnhart’s followers through the fire, when the explosion took place, and the highway collapsing.

“It was an opportune moment so I went out there, and put my life on the line, for a laugh or two,” Barhart said when asked about the video.

Mandy Carranza was on her way home from the gym when traffic began to slow. She noticed a huge cloud of smoke and all of the cars around her came to a complete stop under the exit sign for 237 North and Piedmont Road. 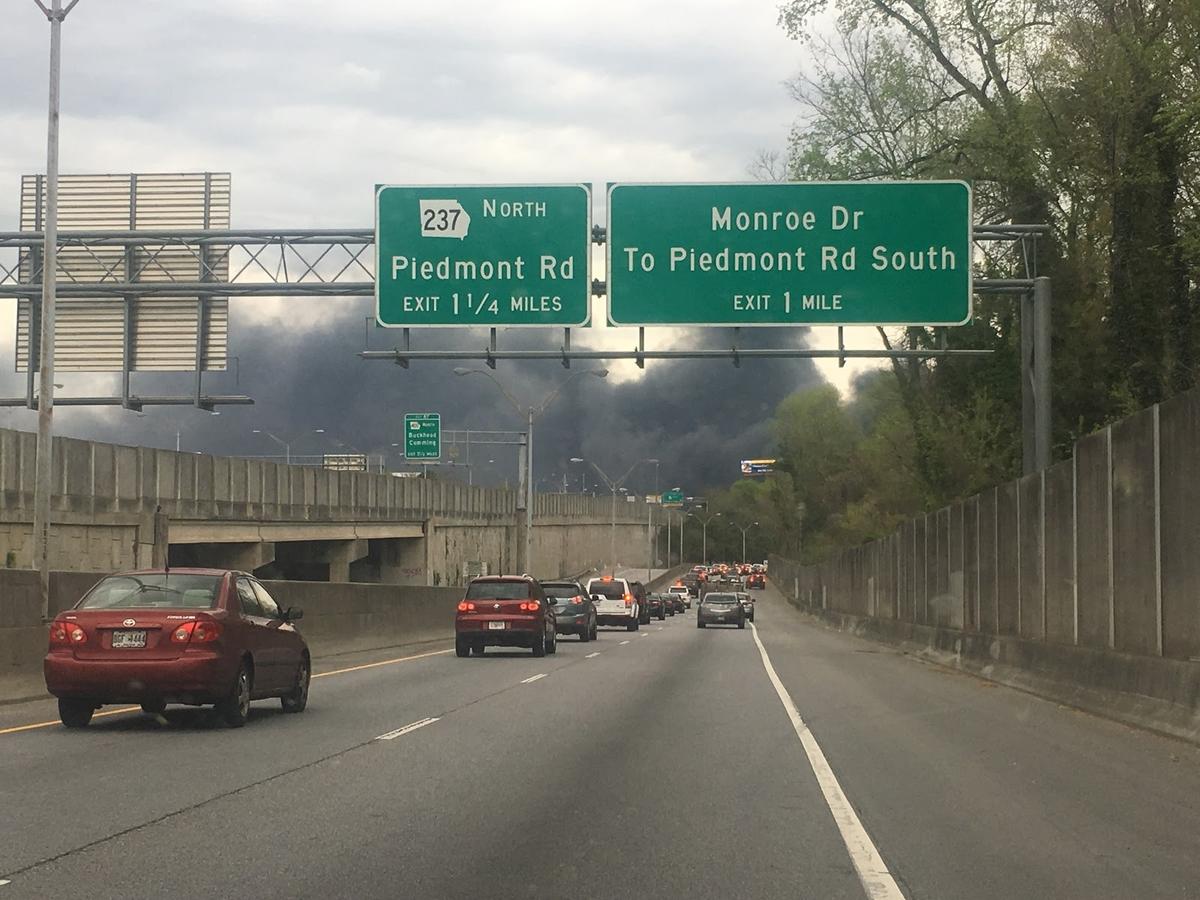 “There was no information available because everything was unfolding,” she said. “I called 911 and the operator said they had been receiving calls but they didn’t have any information or know what it was. That concerned me.”

Carranza noticed the other drivers around her were not reacting to the situation.

“They were all just looking at their phones,” she said.

One of the drivers told Carranza he heard the fire was a result of something nuclear. It was a report that turned out to be untrue, but it put her on high alert.

“At that point I made the decision to get into the emergency lane and back up for about a mile to the ramp where there wasn’t an emergency lane but cars just moved over,” she said. “I just didn’t want to go through that smoke.”

The closed section of I-85 is a key link to some of the city’s biggest suburbs. It carries about 400,000 vehicles a day in a city where there are surprisingly few alternative routes for its size.

The federal government promised the city $10 million in funds to help with rebuilding, and officials pledged that a replacement bridge would be built as soon as possible. Still, they said,  that could take months.

The toll this could have on the city’s traffic in the months to come is still unknown, but some residents are considering long-term solutions.

Marcie Ross recently moved from Inman Park to Roswell and works in Midtown. She plans on working from home for the foreseeable future.

And when she has to go in to the office?

“I think MARTA is the only option I’ll consider,” she said. “Right now it’s more effective for me to work from home with the longer commute times. Not to mention saving my sanity!”

The Associated Press contributed to this report.