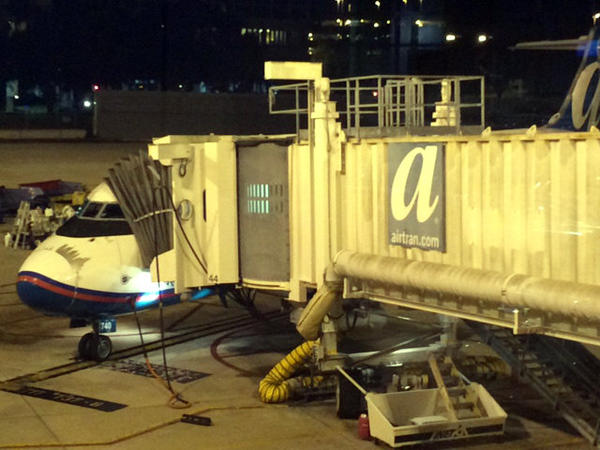 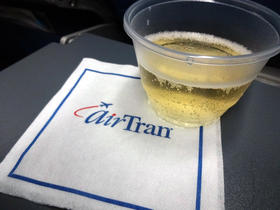 Late Sunday night, AirTran Airways flew 115 117 passengers from Atlanta to Tampa. But the 70-minute trip was anything but a typical AirTran flight.

It was the final one.An audio version of this story, as aired on WABE's Morning Edition

More than 800 hopeful travelers were on the flight’s standby list. Most of the folks who made it onboard AirTran Flight 1 were current or former AirTran employees, with a handful of journalists and Southwest executives scattered among the seats. 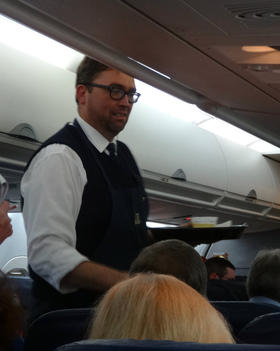 Cheers erupted as the Boeing 717 painted with AirTran’s logo lifted off from Hartsfield-Jackson Atlanta International, and once the plane ascended to cruising altitude, company executives took to the aisles.

“By the way – if you bought just a regular ticket on this flight and you just through you were going to Tampa and didn’t expect this – this party is not for you. It’s for everybody else,” joked Southwest’s Bob Jordan over the plane’s PA system. He’s been running AirTran for the past few years, a job he said has been a true privilege. “I want to say thanks again to the folks of AirTran. This is awesome. It’s a fantastic way to commemorate this last flight, and a fantastic way to commemorate moving forward together as one awesome company.”

After a toast and a smooth landing, senior flight attendant Travis Bruce made AirTran’s final onboard announcement: “Ladies and gentleman, welcome to Tampa and the end of an era.”Web Extra: WABE gave AirTran flight attendant “AirTana” a recorder and asked her to interview her colleagues as they prepared for AirTran's final flight. Here, she talks with head flight attendant, Travis Bruce, about the bittersweet experience. 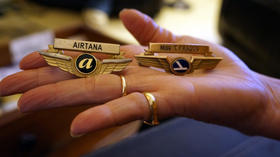 The journey traced ValuJet’s 1993 inaugural flight. After a deadly crash in the Florida Everglades, ValuJet struggled to remain in business. It eventually re-emerged as AirTran, and managed to stay afloat even as other airlines fell into bankruptcy or closed shop. 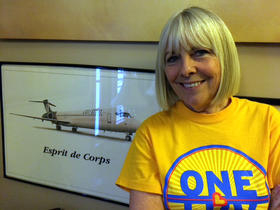 Trish Krider worked as a flight attendant under both names.  She said that ability to survive is no accident, but instead the result of many employees’ hard work.  The final flight, she added, was a proud one for AirTran employees. “The fact we fought from ValuJet all the way to where we are, to be a company that Southwest wanted to own, is just the most amazing experience,” she said.