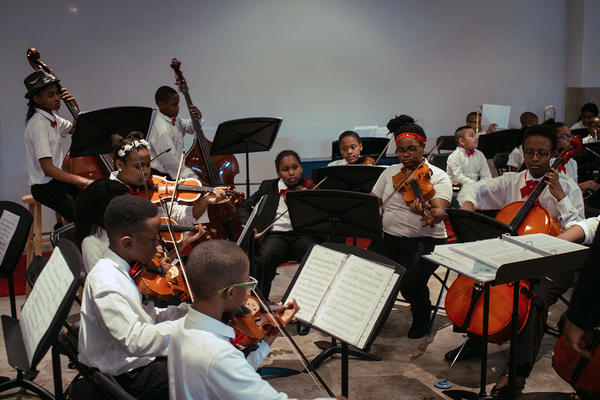 On Saturday, more than 100 of Atlanta’s promising young musicians will take their cues from a new figure on the city’s music scene.

Joseph Young, the assistant conductor for the Atlanta Symphony Orchestra, will lead the Atlanta Music Project in its annual spring concert.

Young joined the ASO last year and his role includes being the head of the youth orchestra music director.

Since its inception in 2010, the AMP has offered a rigorous after-school music program for underserved youth in the city of Atlanta, and has a current enrollment of 115.

The AMP program – which co-founder and executive director Dantes Rameau said offers ”not just music, but also social change” – is offered to students in three east and southwest Atlanta venues. A fourth location will open in the fall.

On “City Lights,” Rameau said that since getting some early foundation funding, the program has picked up a variety of additional backers. In all, around $1.3 million has been raised.

“There’s a sense that there’s potential for youth in the city,” he said. “If they’re allowed to improve their academics and their character, people of Atlanta will support that.”

The latest extension of that support is a new scholarship program with the Clayton State University Music Department for college-bound AMP alumni.

Richard Bell, an assistant professor of music at Clayton State, said the school will make up the difference in tuition and room and board costs for former AMP students who major or minor in music and who qualify for Georgia HOPE scholarships, federal Pell grants and other forms of financial aid. The scholarship assistance is being provided by an anonymous donor.

“It’s a wonderful partnership in many ways,” Bell said.

The Atlanta Music Project concert begins at noon Saturday, May 2 at the Rich Theatre in the Woodruff Arts Center. Admission is free, but donations will be accepted.