Prior to 2010, the state of Georgia treated many with a developmental disability or mental illness in state psychiatric hospitals. However, a federal lawsuit alleged the state was violating the Americans with Disabilities Act and a 1999 U.S. Supreme Court decision by unlawfully segregating the mentally ill and those with developmental disabilities in the state’s psychiatric hospitals. Under a five year settlement reached with the U.S. Justice Department, at least 9,000 developmentally disabled and mentally ill Georgians are supposed to receive services in community settings. State officials and mental health advocates say a center focusing on mental health recovery in Cartersville is one the successes to come out of the settlement. 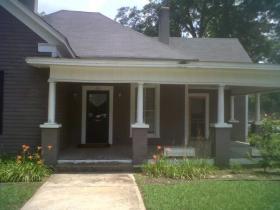 A gray house without a sign or outward markings sits on a quiet street near downtown Cartersville.

“Here is our office, and if it looks like a closet it’s because it is a closet.”

The three-bedroom home is one of three peer support, wellness and respite centers in the state.

“This is kind of like our Cadillac room, because it has a bathroom attached to it, and there’s clawfoot tub in here, so I think everybody kind of likes this room.”

James Guffey is the center’s director. If you’re going through a mental health crisis, or if you need support from your peers, the 30-year-old says you can stay here for up to a week every month rather than being hospitalized. Guffey says the center is radical change from most previous mental health treatment, because it’s not like a hospital.

“Mainly because there are no doctors, there’s no nurses here. When somebody walks in the door we don’t even ask them their diagnosis. This is something that’s very self-directed.”

The center offers daily classes and activities that focus on things such as job readiness, recovery and relaxation. On average, 15 to 18 people stay at the center every month. Signing into the center is voluntary and is open to all Georgians.

Those staying or accessing services at the center are assisted by staff members who undergo at least 80 hours of certified peer specialist training and are themselves recovering from mental illness. Like many who come to the center, Guffey has struggled with mental health challenges and faced difficult circumstances growing up.

“Growing up was difficult because when I was five I was molested by an uncle. My mother was an alcoholic, and she died at the age of 34, so I really felt like I was on my own since I was 15.”

As a pro wrestler, Guffey became addicted to pain killers after being injured in a match. He became depressed and attempted suicide in 2009. Eventually, Guffey underwent treatment for drug addiction and learned many of his mental health issues stemmed from his past. Guffey uses his experience to help others at the center.

53-year-old Mary Jacobs came to the center about a month after it opened in 2011.

“I was seriously suicidal, and all I really wanted was to try to figure out how to write final letters to my children to relieve them of any guilt they might feel for my suicide.”

“My mother shared me sexually with her friends. I was beaten severely. If I resisted, I was locked in a closet on a regular basis. It was a nightmarish childhood.”

And prior to coming to the center, she had been in and out of psychiatric hospitals receiving diagnosis after diagnosis. But Jacobs found something different at the center.

“No locked doors, no restraints, nothing but understanding and compassion.”

A year and a half later, Jacobs is on a different path.

“I had been on disability 15 years and was living in the projects, public housing. Now, I’m renting a home, I just bought a new car last year, and I’m in the process of buying a new home.”

Jacobs now works as a certified peer specialist, helping others with their mental health challenges.

“It makes me feel like I have something to offer, that I did somebody else some good, and I got something out of it too.”

Jacobs says the state needs many more centers like the one in Cartersville, so others can receive the same support that she has.