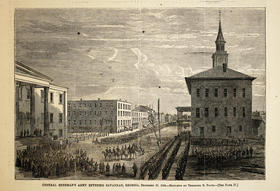 The day after President Lincoln was reelected on Nov. 8, Union General William T. Sherman planned a measure to end the Civil War once and for all. Half his forces marched north, to defeat the Confederate army in Tennessee. The rest marched from Atlanta to Savannah, destroying anything that could possibly support Southern armies as it went.

The idea was to wage war on the Confederacy’s morale as well as its capability. Here, in full, is Sherman’s Field Order Number 120.

Sherman marched his army through Georgia, capturing Savannah on Dec. 21, 1864. He estimated that his march to the sea inflicted more than $100 million in damages, including the confiscation of more than 20,000 livestock and 20 million pounds of food. The march destroyed much of the South’s ability to wage war.

This excerpt was read by Kevin Stillwell. WABE’s Kate Sweeney produced this series. Special thanks to the Kenan Research Center at the Atlanta History Center, which provided historical content.