“We love them as they are, loud, dirty, competitive…”

Those words are from Atlanta-based photographer Kate T. Parker about her daughters, who were the inspiration for a photo series called “Strong is the New Pretty.”

The series contains strikingly candid and starkly beautiful images of Parker’s daughters Ella and Alice and their friends. 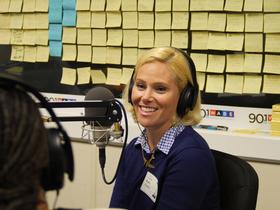 “I was trying to capture them as they were and as they are daily, and a lot of that is messy,” Parker said on “A Closer Look.”

The series was shot over a two year period and grabbed national attention for its clear and simple message about how girls should be seen by others and themselves: silly yet adventurous, athletic and loud, fierce and funny, loud and happy.

“I was trying to showcase that girls get these messages to be thin and perfectly groomed and complacent and smiling to be considered beautiful and I just didn’t believe that and I didn’t want my girls to believe that,” Parker said.

“I believe that the most beautiful women and the girls are the ones that are confident and true to themselves,” Parker said, explaining she wanted her girls to know that and see it in pictures of themselves.

Parker told Rose Scott and Denis O’Hayer that the response to her series has been “overwhelming.”

Find out which national celebrities have commented on “Strong is the New Pretty” and more about why Parker wanted to do the series on ”A Closer Look.”