A group of Georgia State University students held a silent protest during Saturday’s commencement ceremony against the planned changes to the student-run radio station, WRAS 88.5 FM. Wearing WRAS logos on their graduation caps, the students hoped to send a last-minute message to the administration.

Last week, the university announced a two-year deal with Georgia Public Broadcasting, which would allow GPB to air its own programming on 88.5 F.M. during the day, while students would air their own 24-hour programming online.The broadcast version of this story.

“The tradition of college radio is that it’s analog. You hear it in the car,” she said. “When they push us off to online, we’re competing with Pandora and Spotify and all the other options that the millennials have today.”

Zimitravich and half a dozen other protestors passed out more than a thousand stickers for students to wear on their caps. 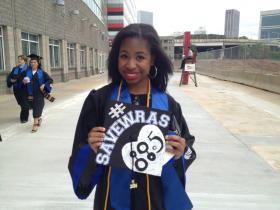 Graduating seniors like Jewel Wicker, a former editor for the school paper, said the decision by the administration should have been made differently.

“I wish they would have at least consulted with us first so that they could have made it more beneficial for students, instead of just making decisions without our consent,” Wicker said.

After the ceremony, Doug Covey, GSU’s vice president of student affairs, said that the demonstration didn’t change the fact the deal’s been made.

“We’re sincerely interested in their feedback, we understand their passion and we think in time, they will come to understand that this is a collaboration which will be very good for the station and the university as well as GPB,” Covey said.

He said the partnership would be beneficial for students in the long-term.

“We’re confident that this will actually improve their opportunities,” Covey said. “We will have as many students working at the station as we had before, they’ll still be doing live-programming of their own design 24 hours a day, but as a result of this partnership, they’ll now have a much larger platform in which to showcase their work.”

The changes to programming are scheduled for early June.