Though “The Milliner of Beijing” may sound like the title of a Rossini opera, it’s actually the nickname given to Atlanta native Elisabeth Koch.

As mainland China’s only milliner, or hat-maker, Koch has steadily carved out a couture fashion niche, crafting hats for Chinese blockbuster movie stars and models on the cover of Vogue magazine.

In an interview for “City Lights” with Lois Reitzes, Koch credits her craftiness to her Dutch/Welsh parents: “I come from a very creative family … If you didn’t have it, make it.”

So, if Barbie needs a new dress? Sew one.

As an adult, Koch studied communications and made her first career in banking, but after work, she still knit and sewed and crafted. So when her husband was offered a job abroad, Koch saw an opportunity for her own radical career switch. Sure, she had always loved hats — she grew up collecting vintage hats — but practical questions had to be answered, like “Who makes hats? Can you still make hats? Can you learn? Does anybody want to buy hats?” 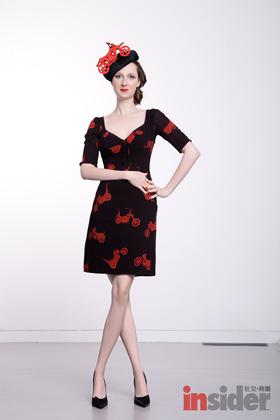 Those questions were answered, at least in part, when Koch attended the Wombourne School of Millinery in the U.K. What Koch did not know, however, was if anybody in China wanted to buy her “fun, party, feathered” couture hats. Was she aware that there were no milliners in mainland China?

Part of that plan included attending parties and getting noticed by “wearing the craziest hats I have. Preferably the ones with the motorcycle or the lobster on my head.”

It worked. Within six months her hats were featured in a 12-page spread in China’s Harper’s Bazaar.

While the magazine spread was not the big break Koch had hoped for, that fashion feature did lead to more photoshoots, and more high-profile customers, like Vogue China’s 100th issue anniversary special, shot by Mario Testino.

One of those common misconceptions is that there are those who look good in hats, and those who do not. So, don’t admire Koch’s work only to say, “I don’t wear hats.”