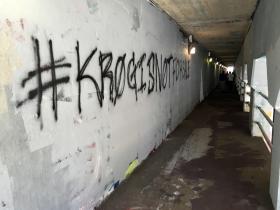 “I think artists were upset that their work was being used to promote and sell tickets to this party without any compensation to them,” said local artist Peter Ferarri, who was among those repainting the tunnel Wednesday night.

An updated audio version of this story

The masquerade, a private, ticket-only event, is being put on by The Atlanta Foundation for Public Spaces. Described on its Facebook page as a “sultry underground event like no other,” the party will limit tunnel access for part of the weekend, and completely close it to both cars and pedestrians Saturday night.

The lack of tunnel access is largely what’s upsetting neighbors, many who showed up Wednesday night. They’ve long vocalized their opposition.  As WABE earlier reported, the event’s application went through the city’s standard event permitting process, including a hearing before the Neighborhood Planning Unit. NPU-N members eventually voted down the application. The city approved the permit anyway. 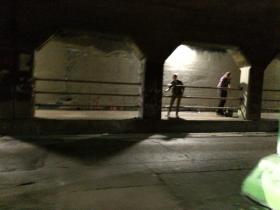 Not long after it was clear the show would go on, no matter how much people objected, talks of protest-by-paint gained momentum on social media.

“We’ve honestly had a plethora of artists in the community coming out just basically appalled and upset that this has happened, and looking to repaint it,” says Fox. “We anticipate that by event time, the walls will be back up in their glory.”

However the Krog Street Tunnel ends up looking Saturday night, artist Peter Ferarri says the plan is to quickly restore it.

“So my guess is in the next week, you’re going to see some of the best art you’ve ever seen in that tunnel,” he says.

Promoter Randall Fox says since Wednesday’s repaint, masquerade ticket sales have increased sharply.  The original goal was to sell between 1,500 and 1,700 tickets at $40-$100 each. Fox declined to say exactly how many people have purchased tickets, but he tells WABE he expects final numbers will exceed the original goal.