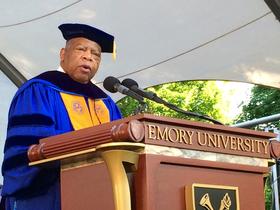 Georgia Democratic Congressman John Lewis Monday gave the commencement address at Emory University’s graduation ceremony, drawing from his role in the civil rights movement in his speech to students.

Lewis, who was also one of three honorary degree recipients during the ceremony, began his address with memories of growing up in segregated Alabama, seeing signs that read “whites only” and “blacks only.”As heard on the radio

“I would come home and ask my mother, my father, my grandparents, my great-grandparents, ‘why?’ They would say that’s the way it is. Don’t get in the way, and don’t get in trouble,” Lewis said.

The 14-term congressman said meeting Rosa Parks and Martin Luther King Jr. inspired him to join the civil rights movement, and called on the more than 4,000 Emory graduates who received a diploma Monday to take up the same activist mentality as they move on from the university.

He finished his speech by telling the graduates to use their education to fight against discrimination.

Ibitola Adesuii received a bachelor’s degree in Economics and has a job lined up at Bloomberg. Speaking after the ceremony, she called Lewis’ speech inspiring.

“This is not the last point,” the new graduate said. “You can’t just stay at your bachelor’s degree. You have to advance and be a productive member of society, so that’s what I took from it.”

Sehar Ali, who received her bachelor’s degree in psychology, said the speech was something she needed to hear before leaving school.

“College has become such a common thing now, and it’s like one degree isn’t enough, so you kind of have to keep going. And I think that’s kind of what his speech was saying – no matter what happens, keep going with what you want to do,” she said.

Ali said she doesn’t have a job lined up yet, but hopes to have something by September.