In an effort to get more people out to the polls this Election Day, a new group launched an effort to register first-time voters.   But the group has claimed more than 40,000 registration forms went missing.

The issue of the so-called missing forms created a public tug-of-war between Secretary of State Brian Kemp and voter registration group the New Georgia Project. The group sued Kemp and some Georgia counties. 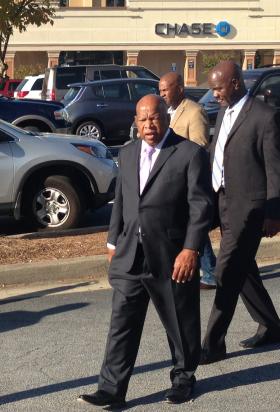 Kemp insisted there were no missing forms. He said all eligible voters had been processed.

“I would ask that the New Georgia Project, the Lawyers’ Committee for Civil Rights, Pastor Warnock, Congressman Lewis, and anyone else who accused the counties of voter suppression to apologize and then to withdraw this ridiculous lawsuit,” Kemp said at a press conference.

Georgia Congressman John Lewis, a key figure in the Civil Rights Movement, said at a campaign stop Monday the group has nothing to apologize for.

“I think there’s been a deliberate and systematic effort to make it harder and more difficult for people in this state to participate in the Democratic process,” Lewis said. “It’s not just Georgia, but several states are doing the same thing.”

The New Georgia Project says state laws need to be updated to ensure registrations don’t slip through the cracks.