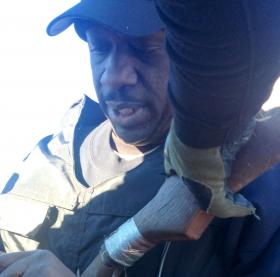 The Atlanta branch of the NAACP held its first-ever gun buyback Thursday, calling it a nonviolent event in leading up to Monday’s Dr. Martin Luther King Jr. Holiday.

On a frigid morning, people lined up in their cars along Central Avenue just west of Turner Field to surrender their firearms to law enforcement officials. One of them, Tommy, who declined to give his last name, handed over his .22 caliber antique rifle.

“It’s been around the house for years, and I got grandkids there, and I don’t want them to even play with it and think it’s a BB gun or whatever,” Tommy said. “I don’t keep it loaded or anything; I just don’t need it at the house.”

Bill, who also didn’t want to give his last name, turned over a .25 caliber semiautomatic pistol and an old revolver, both of which he said no longer worked.

“I don’t believe they were safe to even fire, to tell you the truth,” Bill said.

We wanted to guarantee them anonymity – no questions asked – to get rid of those guns so that they won’t feel afraid or intimidated by coming,” said the Rev. R.L. White, president of the Atlanta branch of the NAACP.

The group offered up to $100 to people who surrendered working guns and gift cards for nonfunctioning weapons.

White said he hopes the event helps reduce violence by getting guns off the street.

“Every time you turn the TV on, you know, somebody else has been shot, and we have to do something about it,” White said.

But a bill that would expand gun carry areas to churches, public buildings and college campuses that didn’t pass last year could be revived during the current legislative session.

“We didn’t ask for guns in our churches. Our state legislators – some of them – decided this was a good idea,” Warnock said. “We’re grateful that was pushed back, but please know that we will be vigilant on this issue in the coming legislative season.”

Efforts against the bill could be bolstered by a statewide poll released Thursday afternoon by Insider Advantage Georgia that indicated 56 percent of Georgians oppose the measure to expand carry laws to those areas.

White said the NAACP had already given out “thousands and thousands” of dollars in exchange for weapons after two hours but wouldn’t give a specific amount. The number of guns turned in was also not available.