An international trade case over solar panel imports could mean an end to the solar industry boom in Georgia, putting one of the few prosperous parts of the state’s rural economy at risk.

The case coming from two U.S. solar panel manufacturers, Solar World and Georgia-based Suniva, had its first hearing in Washington, D.C. this week before the U.S. International Trade Commission. A decision about whether to impose tariffs on solar panel imports would ultimately fall to President Trump.

If the commission determines the country has been hurt and Trump imposes tariffs, solar panel prices will double, according to Corey Honeyman of GTM Research.

“Collectively up to 50 percent of the U.S. solar market is at risk of being lost over the next five years,” Honeyman said.

Tariffs could mean 88,000 jobs in the industry would disappear, according to the Solar Energy Industries Association (SEIA).

Higher panel prices would hit solar farming in Georgia especially hard, Honeyman said, because most of the solar farms here are large-scale, meaning the additional cost of the panels would be multiplied.

And he said there’s nothing in Georgia to mandate utilities invest in renewable energy sources, unlike California, for example.

Still, Georgia does more solar farming than 42 other states, according to SEIA.

A Georgia Power program has helped lead to a number of large-scale solar projects around the state, but the company can’t sign contracts for solar if they can get the energy cheaper from somewhere else, like natural gas.

Georgia Power wouldn’t say how close recent contracts have come to that threshold.

All of this has farmers and county officials nervous in rural parts of the state where the solar industry has created a new way for landowners to make money and boosted the budgets of local governments.

Along the Florida and Alabama border, solar farms in Decatur County have been a much-needed injection into the local economy, which has sputtered since the recession when it lost 16 percent of its jobs.

That meant the county was getting fewer tax dollars, and at one point the budget came up a million dollars short, Chairman Pete Stephens said.

“If you’re not growing you’re dying,” he said. “We were dying, and it was time to start living again.”

Stephens, standing in the shade under a small patch of trees, looked out on one massive sign of life in his county.

The South Georgia sun hit a field of solar panels covering nearly a square mile, which Stephens said is worth a million dollars in taxes for the county each year.

“It’s a welcome sight here in Decatur County,” he said, and he’d like to see more of them.

But two new projects stalled recently because the developers aren’t sure they can make money anymore on solar. They worry solar panels will get a lot more expensive, Stephens said.

Stephens is concerned about what the means for the future of the county’s budget.

Panels are cheap right now thanks to a flood of imports from Asia, but Solar World and Suniva are pushing for the feds to change that.

“We’re being harmed by a global surge from around the world,” said Tim Brightbill a lawyer for Solar World. “The harm is so great that there’s almost no solar manufacturing left, even though solar demand is very strong here in the U.S.”

“If we want renewable energy to grow and flourish in the future, then we need to have that manufacturing here,” Brightbill said.

Suniva and Solar World want tariffs, which would make imported solar panels more expensive, and according to the companies, help them compete and create more jobs.

Despite Trump’s pro-manufacturing, and pro-fossil fuels rhetoric, Honeyman said don’t try to predict what the president will do if he gets to make a decision on tariffs.

“I think it would be naive to have any sense of what will happen,” Honeyman said.

To stop tariffs, solar advocates have joined with conservative, pro-business groups like the Heritage Foundation, and even a lobbying group backed by Charles G. and David H. Koch, who’ve made part of their fortune from fossil fuels.

One of the first publicly elected officials in Georgia to endorse President Trump opposes potential tariffs on panels.

“If the requested remedies are imposed, solar energy growth will draw to a standstill,” Georgia Public Service Commissioner Lauren “Bubba” McDonald said. “Many solar manufacturing companies have risen to the challenge of competing and are not looking to the government for protection.”

Back in Decatur County, Tommy Dollar looked over some of the panels he’s installed near his agriculture business. 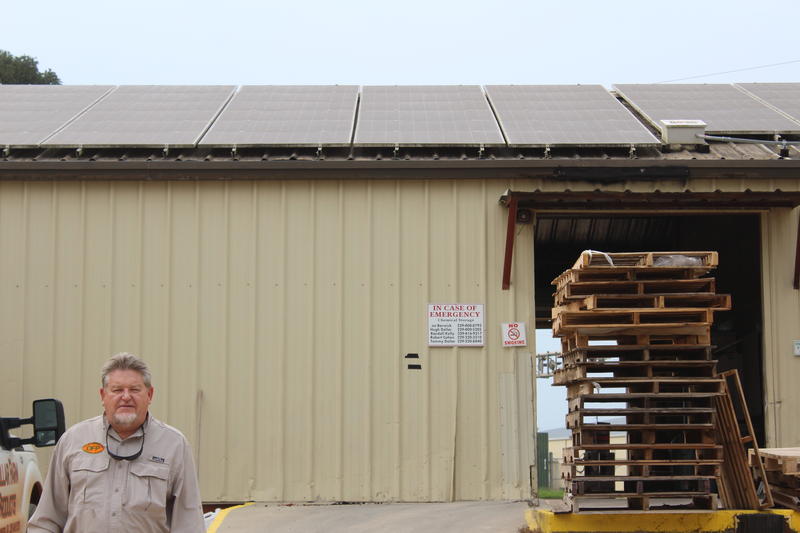 Solar has been a boost for a lot of farmers in the area, he said, and they’ve put in small arrays in the corners of their fields.

“We’re just farmers, we harvest crops and sunlight,” said Dollar, who likes the idea of people making solar panels in the U.S. because it could mean more jobs here, but not if it jacks up the cost of panels.

President Trump should think carefully before he decides on tariffs, said Dollar.

Most small farmers can survive if the cost of solar panels goes up, Dollar said, but he worries about what it would mean for the future of his rural community that has come to depend on the solar industry.