Twice a week, the rickety Winnebago operated by Atlanta Harm Reduction Coalition (AHRC) pulls up to one of the most troubled intersections in the Southeast. A line quickly forms. The original broadcast of WABE's documentary Stuck in the Bluff

(To hear this documentary, click the “Listen” icon above. To view a verbatim transcript of this program, click here.)

Troubled hands grip used syringes, waiting patiently to exchange their used needles for clean ones. These are heroin addicts, forgotten, and existing—sometimes barely—in a system that criminalizes the people who are working to help addicts change their lives. To tell their story, and acknowledge their troubled future, 90.1 WABE News will interrupt regular programming January 24th at 7 p.m. for this in-depth documentary. The program will be re-broadcast on Sunday, Jan. 26, at 9 p.m. 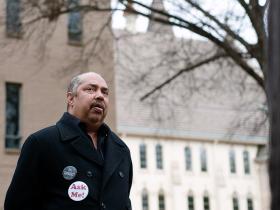 Timeline: The Tangled Timeline of the Bluff

The Atlanta Harm Reduction Coalition is a shoe-string organization behind a controversial needle exchange program.  Due to Georgia’s anti-paraphernalia regulations, the AHRC is participating in illegal activities each time they venture out. Because of the stigma surrounding what they do, and a challenging climate for non-profits, AHRC is in danger of closing its doors.

“Stuck In The Bluff: AIDS, Heroin and One Group’s Illegal Quest to Save Lives” is a documentary which began as a series of WABE News reports done in collaboration with alternative news outlet Creative Loafing in Atlanta, Georgia.