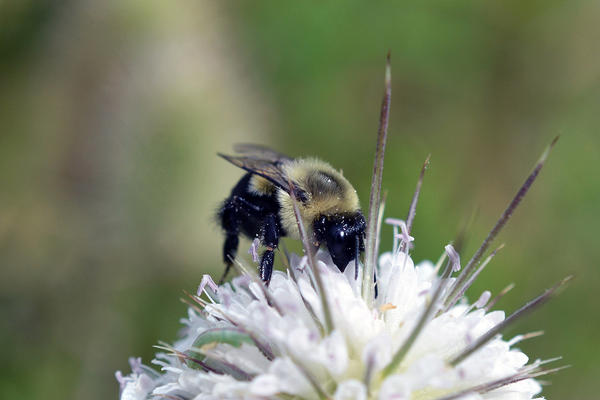 There are hundreds of species of bees in Georgia, and unlike the European honeybees that people keep in hives, many native bees live alone, in holes in the ground. They haven’t been researched much, but a recent study looked at what kinds of forests are best for Georgia’s bees.

“What we found was that if you have fewer trees, you tend to have more bees,” said Jim Hanula, a research entomologist with the U.S. Forest Service who studied bees in the Oconee National Forest, southeast of Atlanta. He collected more than 120 species of bees during the study.

There are more bees and more species of bees in recently cleared forests and in forests with big trees, far apart, without too much brush between them, Hanula said. He found that the worst for bee diversity and numbers are crowded young pine forests.

“Probably most of the forests in the state of Georgia are not ideal for pollinators,” Hanula said. “They tend to be more dense.”

He said prescribed burning can make a forest a better home for bees. That matches the findings of Sabrie Breland, a research technician at the Joseph W. Jones Ecological Research Center in southern Georgia. She researches how bees are affected by the restoration of longleaf pine forests and by prescribed burning, and she said the patterns Hanula found make sense.

“What he found was consistent with what I would have expected,” said Breland, who wasn’t involved in Hanula’s study. She said one takeaway she had was that creating a good forest structure – not too crowded with trees, a diverse mix of plants on the forest floor – has more impact than worrying over the exact plants in the forest.

“You might be tempted to think that you have to put a lot of effort into re-establishing the plant community, and that would be something that is really labor intensive,” she said. “But I think the point of his work, and really the point of what I saw, too, it’s really that forest structure that’s important.”

Hanula said there has been a lot of effort in Georgia recently to bring back that forest type, often using fire to help.

“Before Europeans arrived, that’s the type of forest that we had,” he said. “For people interested in pollinators, this benefits pollinators. Those conditions are also beneficial for things like the red-cockaded woodpecker, which is an endangered species.” Thinning trees also makes them healthier and more resistant to pests like the southern pine beetle, he said.

And there can be an extra benefit, Hanula said. If the forest is near a farm, the native bees may come out and help pollinate crops. Solitary native bees aren’t affected by colony collapse disorder, which hurts the managed honeybees used on farms, he said. But if they are declining for some other reason, he said, scientists wouldn’t know, since they haven’t been studied enough.