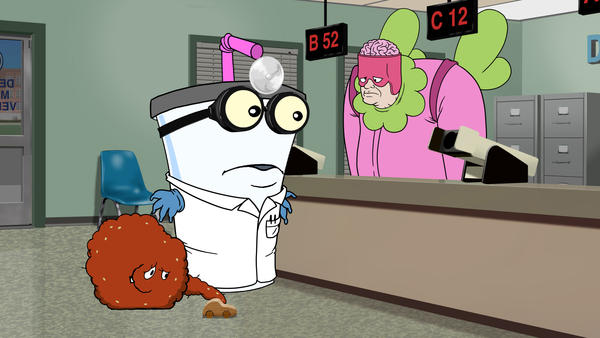 “Aqua Teen Hunger Force” is the longest-running original cartoon on Adult Swim, the decidedly child-unfriendly block of evening programming on the Cartoon Network. “Aqua Teen” is distinguished by its bizarre humor and the fact that its main characters are a talking milkshake, french fries and a wad of meat.

The show is in its 11th and final season, and WABE’s Myke Johns sat down with co-creators Matt Maiellaro and Dave Willis to talk about the show’s end and about where it began.

On why “Aqua Teen Hunger Force” is coming to an end:

Maiellaro: “That’s a good question. We have a few answers for that.”

Maiellaro: “They got tired of the trucks pulling up and dumping it on the loading dock. It wasn’t our decision. We would’ve obviously kept making it because we like it. They don’t.”

Willis: “We don’t own it, so any talk would happen with the owners of the show.”

On the creative process of the show:

Maiellaro: “We have a lot of liberties with it to be weird because it’s a cartoon and they’re food products. A lot of the things that happen in the show have actually happened to us in real life. So we draw on real-life experiences and then we enhance them with the magic of animation.”

So as with this current season, the Hairy Bus … this came from real life?

Willis: “Yeah, the Fur Bus. There’s a bus that goes around town, but I’ve never been on it. I’ve heard about it. And I was like ‘what makes this thing so special that you’d want to rent it on your bachelor party?’ And then it just sounded like a funny idea that there’d be a bus like that … that was alive and that digested bachelors on the night before their wedding.”

Maiellaro: “And, of course, he had a brother …who’s not hairy.”

Willis: “Yeah, this is where we start to get to the point where we’re enhancing from reality.”

On the origin of “Aqua Teen”:

Maiellaro: “Dave and I wrote these characters into a ‘Space Ghost’ show back when we were working on ’Space Ghost’. And I think we did 20-plus drafts of that script. And it was never approved to get produced because they hijacked the whole show and Space Ghost didn’t have anything to say. And once ‘Ghost’ went on hiatus, Dave and I said, ‘Let’s see if we can do this show.’ And we said, ‘Can we do this show?’ And they were like ‘no.’ ‘Uhh, can we please do it?’ ‘No.’ And then we pitched it … we had to pitch it, and then we got a little money to make the pilot. We were only allowed to make six and we were gonna think about how to wrap it up at number six. And then we just started drinking, and I can’t remember the rest of it.”

Willis: “I think we were encouraged to be sort of willfully weird with ‘Space Ghost.’ And when we started making ‘Aqua Teen,’ I don’t think we fully knew how to make a cartoon just yet. I think we thought we did, but then we sort of started to figure it out. And you also have a quarter-hour, so you’re not gonna get bogged down with a lot of B-story and a lot of sort of classic sitcom stuff that I think both of us find pretty boring anyway. And we wanted to do something different and unique. So yeah, we pretty much violate all the rules, I guess, if there are any rules.”

Maiellaro: “I feel like we had the characters pretty much developed, we were just barely working on ‘em. I feel like the show found itself with the Mooninites episode, which was number three or four. And we were like ‘this is what the show is.’ I think we always knew what it was, we were just figuring out how to make it. Because we had to do everything. I mean, we spent a lot of money and time messing up the animation and we had to go back and redo it. We kind of knew what we had and what we wanted to do with it. And the other thing is we had a lot of freedom. I mean, Dave and I just did what we thought was funny and people kind of left us alone and let us do it.”

On ideas they never got to do on the show:

Willis: “We were gonna do an episode where (actor, ‘Robot Chicken’ creator) Seth Green moves in next door to the Aqua Teens. Because he’s gonna play Meatwad in a movie and he wants to start hanging out with Meatwad. And then we were told that we couldn’t ask Seth about it. Or make eye contact with Seth.

“Oh! Here’s a good one: We were gonna do an episode where the Aqua Teens take the CNN tour, and Meatwad is bitten by (news anchor) Wolf Blitzer and turns into a wolfman.”

Maiellaro: “We got in a lot of trouble for that one.”

Willis: “We emailed Wolf Blitzer directly, and he responded to us directly! And we were like aren’t you busy in Afghanistan? And he just responded back, ‘This should probably go through a publicist, but it doesn’t sound like something I’m allowed to do.’ ”

On Dana Snyder, the voice of Master Shake:

Maiellaro: “I remember we cast him because we put out a casting call and … a friend of Dave’s knew him. And he just left a voicemail. Like (nasally voice) ‘Hey this is Dana Snyder, I heard you’re…’ and we were like ‘That’s the guy.’”

Willis: “He was working in a bookshop. A drama bookshop. And I listen to him now and I’m like, ‘You should have a role on every cartoon on the planet, you’re so good.’ But it blows my mind that we were so lucky to have him sort of fall in our lap.”

On the legacy of “Aqua Teen Hunger Force”:

Willis: “We put 15 years of our career into this show and all our strongest ideas and work, and you’d like to think it’s going to last. Or at least be in reruns for another four more years. I don’t know, maybe it’ll come back. I mean, cartoons don’t ever die. (Actor) Alan Alda gets older, you know? His window to be Hawkeye again is over.