A week from today, several organizations will rally against Governor Deal’s decision not to accept federal funds to expand Medicaid. They’re calling it Moral Monday. Some Atlanta church leaders this weekend spoke to their congregations about this issue. Aleck Ragsdale reports.Click “listen” to hear the radio story 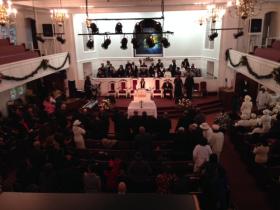 First Iconium Baptist Church is in East Atlanta. Reverend Timothy McDonald wants to get members of his congregation to join in on the Moral Monday protest.

“Georgia is one of those states, and we aren’t surprised, who doesn’t want to extend Medicaid. It would help over 600,000 Georgians, and it would bring in all kinds of money, federal money, into our state”.

After the service, McDonald said expanding Medicaid would greatly help his church goers.

“There are people in our congregation and probably every congregation who don’t have any kind of health care”.

Moral Monday began in North Carolina. Organizers will have events throughout the day next Monday, ending in a rally at 4pm.