This story is part of WABE and American Graduate’s Advancing Atlanta: Education series. For more stories, click here.An audio version of this story.

About a dozen kids are huddled inside the Brownwood Park Recreation Center in East Atlanta on a rainy afternoon. For about 12 children, ages eight to 11, who are trapped inside after a long day of sitting at school, this would seem like a nightmare scenario.

But these children are busy learning about electricity. They’re building circuits from electronic components, a toy version of what’s used in computers and cellphones. All the while, they’re learning how electricity powers things by building model door bells, powering little propellers and even playing music from an iPhone through a little speaker.

This is the East Atlanta Kids Club, an after-school mentoring and tutoring program. 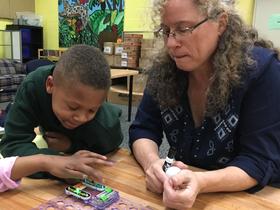 Kevin DeMarco, a doctorate student at Georgia Tech, teaches these children the finer points of how electricity works. Things like why the speaker stops working and cuts off Beyoncé, or why a light goes out when you flip a switch to “off.”

“It’s no longer a what circuit?” DeMarco said.

“It’s what we call ‘edutainment,’” East Atlanta Kids Club Director Jill Sieder said. She co-founded the club 18 years ago as a way to give children in her neighborhood something to do after school and during the summer months.

Sieder’s program is aimed at children whose parents would likely struggle to afford quality after-school care, and the program has ballooned into a holistic approach to addressing those children’s specific needs.

“We find out about each kid sort of what they need to work on from their report cards, to talking to parents, to talking to teachers when we can, and we design activities aimed at the highest common denominator of need we see,” Sieder said.

The club serves children, ages seven through 18, from low-income households in or near East Atlanta. Last year, it served about 80 children. Nearly all of them were African-American, and all but one of the children’s parents or guardians reported a household income that qualified them to receive public assistance.

There are other intensive after-school programs like this in Atlanta, such as the Boys and Girls Club, the Truancy Intervention Project, Raising Expectations and a handful of other nonprofits. But they are not enough.

Georgia has about 600,000 children who qualify for federally funded after-school programs, but not even 10 percent attend one, according to Afterschool Alliance. Mostly because there just aren’t enough programs in Georgia.

“There have been kids who are depressed because there’s a lot going on at home,” Sieder said. “There may be a certain degree of chaos in the house due to financial pressures, or one parent being incarcerated. The power’s been cut off, or there’s been some violence in the home that they’ve witnessed.”

Sieder said they’ll have some children enrolled in East Atlanta Kids Club for years, giving them a special insight into the lives of these children that teachers who’d otherwise have them in class for just a year might not have. Because of that, Sieder said, the staff’s role often extends beyond basic after-school care.

“We have driven kids to venues where they can receive some counseling,” Sieder said. “In most cases, we’ll ask the parents to come in, we’ll have a conference, and say here’s some things we’ve noticed.” 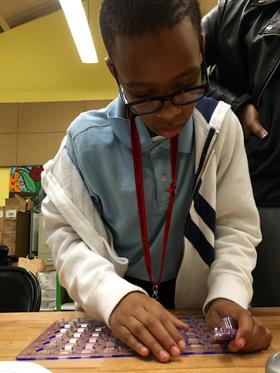 An Eye On Results

Renay Allen, who sent her seven children to East Atlanta Kids Club, said it has opened up their lives to new opportunities.

“They’ve learned to do other things, the arts, the sciences, entrepreneurship,” Allen said.

Allen said two of her daughters continued their education after college. One got a master’s degree in social work and even came back to work for a while at East Atlanta Kids Club.

Back at the Brownwood Park Recreation Center, 10-year-old Damecia Crawford said she likes that she gets help with homework at East Atlanta Kids Club.

She’s been coming for three years, and she said it helps her in school.

“They teach it to us. They don’t give us the straight answers,” Damecia said. “They help us. It helps me in school because when she asks the questions, I know it.”

Damecia said when she not only knows the answer ─ but understands it ─ that makes her feel good.