Five minority women have filed separate lawsuits against Tenet South Fulton Hospital for what they claim are wrongful baby deaths or serious injuries that could have been avoided. The womens’ attorney, James Potts, says four of the babies died within approximately a two month period this past summer. 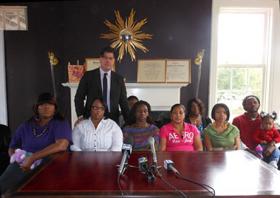 32-year-old Maria Lopez is the latest to file suit in Fulton County Superior Court. The lawsuit alleges that physicians and others at the hospital did nothing to address a medical condition called Preeclampsia that Lopez was unknowingly suffering from. Lopez says once she arrived at the hospital after having labor pains, she learned her baby was dead. She says doctors gave her no explanation.

Another filing suit is 22-year-old Shanquavisa Davis. She says was given Tylenol while unknowingly being in preterm labor at the hospital and was sent home. When she returned hours later, her baby was pronounced dead shortly after birth. “I never got a chance to hear her cry. I never got to see my child’s eyes or anything because my child was deceased.” That left Davis angry and searching for answers. “In some ways I just feel like there was something that could have been done, but they didn’t follow proper procedure and do what they were supposed to do on their end, so I left the hospital after being pregnant for seven months with no child.”

Others suing the hospital include 30-year-old Angel Milan. She says her baby died after she was told she needed a C-section within hours, but it was delayed until the next day. 18-year-old Quachasity Houston claims she didn’t receive a timely C-section despite her baby being in fetal distress. Her child died several days later. Tangela Phillips claims she was forced to give birth naturally rather than undergoing a needed C-section. She believes a suction device used by doctors resulted in serious nerve injury for her two year old daughter, Harmoni.

Attorney James Potts who is representing the women says the women received grossly inadequate care and his office is exploring whether the women’s races and socioeconomic status were a factor in the deaths.

“I want to see people do the right thing. I think you’re entitled to equal medical care. It doesn’t matter what your socioeconomic background or race is.” It ought not matter, and if we have anything to say about it, it’s not going to matter.”

In a statement South Fulton Medical Center says, “Our top priority is to provide safe, quality healthcare to our patients. While it is not appropriate to comment on specific patient care, we deny allegations of negligence in the complaints and will vigorously defend ourselves through the legal process. South Fulton Medical Center has faithfully served the community for nearly 50 years. We continue to dedicate our efforts to putting patients first and providing quality care to our community.

The obstetrical program at the hospital closed on July 26. In another statement, the hospital said the decision was “based on continued reimbursement decreases for this program that make it difficult for smaller hospitals with lower volumes to operate OB efficiently.”