The Georgia Environmental Protection Division has declared a drought in North Georgia, including the Atlanta area.

Friday morning, the agency announced a Level 1 drought in 53 counties. It requires a public information campaign on conservation, but no water use restrictions.

Drought conditions have persisted in Georgia all summer, as measured by U.S. Drought Monitor, but the actual drought declaration is up to the state. Rain from Tropical Storm Hermine quenched South and much of Central Georgia last week, but did not do much for the northern part of the state, where most counties are experiencing extreme or severe drought conditions, according to the Drought Monitor.

Jason Ulseth, spokesperson and riverkeeper with the environmental group Chattahoochee Riverkeeper, said he would have liked to have seen the state take action on the drought much earlier.

“We’re glad to see that the state is finally acknowledging that we are in some form of a drought condition,” he said.

Last year the EPD developed new drought rules, outlining what’s required at each level of a declared drought in the state.

“We’re seeing some early indications of some impacts on some systems, but water supply levels are in pretty good shape,” said Jac Capp, chief of the EPD’s Watershed Protection Branch. “We certainly are not telling people to not use water, indoor or outdoor, but when they are using it, just to be smart in what they do.”

At this point, this is a short-term drought, nothing like the multi-year droughts that Atlanta has weathered in the past, like the one that began in 2007.

“I think we’re in better shape for a drought,” said Katherine Zitsch with the Metropolitan North Georgia Water Planning District. “First of all, we’ve gone through this a few times, so we’re more aware of looking at what could be a multi-year drought. But also because we’ve decreased our water footprint and our water use across the district we’re better prepared because we use less.”

Per capita water use in Atlanta has gone done, thanks in part to more efficient appliances and low-flow toilets, and to water rates that reward conservation.  Outdoor watering is always restricted to hours between 4 p.m. and 10 a.m., whether there is a drought or not. 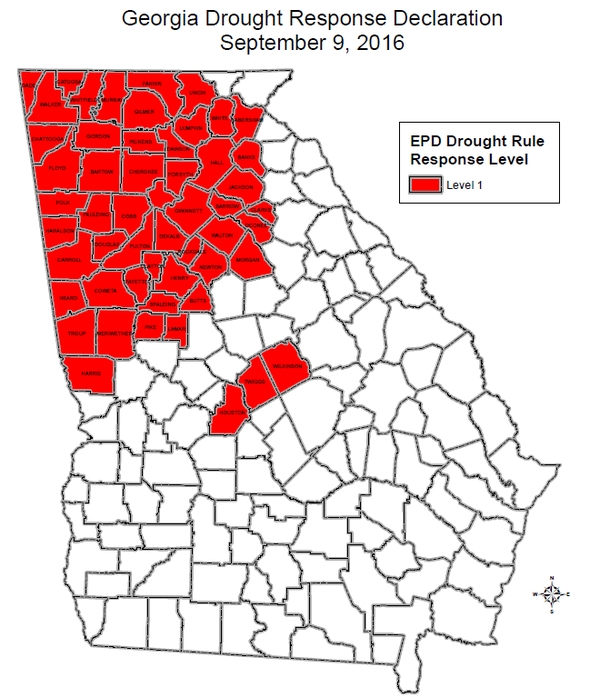