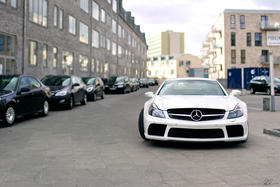 Georgia’s business and political circles have been buzzing about Mercedes’ planned move since the German car company announced plans to move its U.S. headquarters to the state last week.

The move is such a big get for the state that Gov. Nathan Deal even slipped it into his State of the State address Wednesday.As heard on the radio

“The announcement last week that Mercedes-Benz is moving its North American headquarters to Georgia is further evidence that our state will continue to be a leader in job creation,” Deal said, garnering a round of applause from state lawmakers.

So how did Georgia lure Mercedes away from New Jersey? The state offered $23.3 million in “cost savings and cost avoidances,” according to a December letter from the state’s top economic development regarding “Project Eagle.” That number doesn’t include any local or county incentives, so that number is likely to go up.

The tradeoff? Mercedes has pledged to bring 800 jobs to the area and invest $74 million in its new U.S. headquarters.

Lots of states offer big tax incentives to poach companies from other states. Look no further than Nevada’s $1.25 billion deal to lure luxury electric car maker Tesla, or the more than $40 million package Texas offered to Toyota to move its headquarters to Plano. But some economists say it’s unclear whether the state benefits match the lost tax revenue.

“We see these packages, and there’s very little transparency about them,” says Raymond Hill, a senior lecturer at Emory University’s Goizueta Business School.

“We almost never see anyone monitoring to see whether they’ve created the jobs or done anything else to justify the tax benefits,” he says.

The Georgia Budget and Policy Institute estimates this year the state will spend more than $680 million on corporate tax breaks and development programs. That figure doesn’t include any local incentives that get tacked on to deals, nor does it include sales tax exemptions.

“Georgia is typically viewed as being among the more aggressive states with the number of different types of incentives,” says Wesley Tharp, a policy analyst for the institute.

Tharp says the jobs that come from these tax packages help grow the tax base and are good for the state, especially in cases like Mercedes, which estimates an average wage of $78,000. Still, he says that’s money could have gone to schools, transportation or public safety funding.

“It’s really difficult to know exactly what we’re getting from that amount of money that the state gives up,” he says.

One thing is for certain: The practice of offering the hefty incentives doesn’t look to be going anywhere in the near future.