MARTA wants millions of dollars from taxpayers in Fulton, DeKalb and Clayton counties so it can expand.

The plan includes a new light rail line between the Lindbergh Center and Avondale stations, bus rapid transit and heavy rail along Interstate 20 East and an extension of the Red Line north along Georgia 400.

It’s that last part of the plan that’s spotlighted political and economic battles around metro Atlanta and Fulton County, and MARTA will have a tough time getting the money it wants.

Along The Possible Red Line

David Pinson is munching on Chick-fil-A waffle fries during his lunch break at the North Point Mall food court in Alpharetta. It’s right next to Georgia 400, and a stop on MARTA’s proposed expansion north into Fulton County. Like a lot of folks at the food court, Pinson works at a tech company nearby. He lives in Chamblee and says his 45-minute commute is rough. If traffic gets worse, he’d consider moving.

“Spending two hours a day of your life, every day, on the road, it’s draining,” he said.

Pinson said he’d prefer to ride MARTA to work if possible, but there aren’t stations close enough to his home or office. So he had a funny idea, buy another car.

He soon figured out that two-car scheme is unaffordable. He said MARTA needs to be closer to his home and work.

The future of the tech industry in metro Atlanta that employs people like Pinson is fuel for MARTA’s argument that it must expand. “The truth of the matter is for the workers of today and tomorrow, transit access — particularly rail access — is an increasingly non-negotiable point,” said MARTA board chair Robbie Ashe.

Come next year, when people in Fulton, DeKalb and Clayton counties go to vote, MARTA wants them to see a referendum on the ballot. 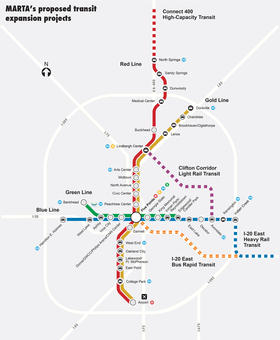 It would ask if they’ll pay a little bit more when they buy a candy bar or a new TV.

That would mean a half-cent sales tax for MARTA to expand, including a longer red line into North Fulton, where the transit agency’s plan faces its toughest opposition.

For MARTA to get the half-cent sales tax, it might need Fulton County leaders like Belle Isle to get on board.

It says counties can put a 1-cent sales tax for transportation projects on the ballot next year.

MARTA wants its own half-cent sales tax for 42 years to help win federal money, not the five years HB 170 allows for, and it wants Fulton County to cap a tax for road and bridge projects at a half-cent.

“If you really want to have traffic impact, if you’re gonna do the penny, then it needs to be focused on where it’s going to have the most traffic relief efforts. And I don’t think MARTA is the answer to that,” said Belle Isle.

Belle Isle wants more lanes on parts of Georgia 400 instead.

He said the high-tech corporations don’t need MARTA. What they really want, he said, are better roads to improve traffic.

“Would they love MARTA?  Sure, I would love MARTA if I didn’t have to pay for it and it wasn’t going to change who and what we are in terms of density and development,” said Belle Isle, “then yeah, absolutely.”

In neighboring Johns Creek, the idea of spending money to bring public transit deeper into the exurbs, doesn’t sit well either.

At a recent city meeting, Councilman Bob Grey read an inflammatory resolution, meant to send a message to MARTA.

But many of the complaints it contains are hard to predict.

There’s a lot of research that shows property values actually go up near public transit.

“Proximity to transit, generally speaking, is associated with higher land values, therefore, higher housing prices. And it’s generally actually the lower-density areas that are near transit that you see increasing the most in price,” said Markus Moos, an urban planning professor at the University of Waterloo in Ontario, and creator of Generationed City.

Saviors In The Legislature?

According to HB 170, for a full-cent worth of sales tax for transportation projects to show up on the ballot, all 14 mayors and seven county commissioners in Fulton have to agree on a plan.

One of those mayors with a lot of sway is Atlanta’s Kasim Reed. According to a statement from his office, “the Mayor believes it is still very early in the process to determine the best approach.”

Atlanta has some very specific projects that could use a financial boost, the BeltLine being the most well-known among them.

For a half-cent sales tax for MARTA to appear on the ballot as part of that full cent, or in addition to it, state law needs to change.

On that front, MARTA has some powerful support.

“If we expect to continue to attract global firms such as Mercedes-Benz, we have to be willing to put the past in the past and think more about the future,” he said. “I plan to rely on the local delegations from the MARTA counties to guide our discussion.” 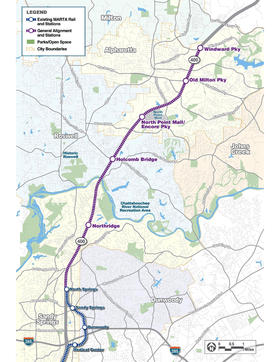 The local delegations he mentions, at least in North Fulton, appear to be divided.

State Rep. Brad Raffensberger (R–Johns Creek), who is in his first legislative term, sees traffic problems that run east to west through Fulton County between Gwinnett and Cobb.

“Our traffic patterns aren’t so much north-south,” he said.

None of the stops on the proposed extension of MARTA’s Red Line are in his district.

“What we don’t want to do, I believe, is make a decision and take on long-term debt for another 42 years and it not be the right solution,” he said.

But the more senior legislator, Republican Sen. Brandon Beach, president and CEO of the North Fulton Chamber of Commerce, has been a longtime advocate for MARTA expansion.

“If you’re gonna be a technology city of the South and a technology hub, and these millennials and these workers want to have transit options, you gotta do it,” he said.

It’s not clear what lawmakers can or will do for MARTA once legislators get together next month for the 40-day session.

They could even make a move so the transit agency could ask for money from voters without Fulton County’s unanimous approval.

Back at the food court, tech worker David Pinson says he’d only vote for more money for MARTA if it would help his commute.

He wants to see something big, and expansive.

“If they had a solid plan to reduce traffic, then yes, I would consider that,” he said.

What Pinson might see on the ballot next year is still anybody’s guess.

For now, any solution to alleviate traffic in Atlanta is stuck between North Fulton cities and state lawmakers.