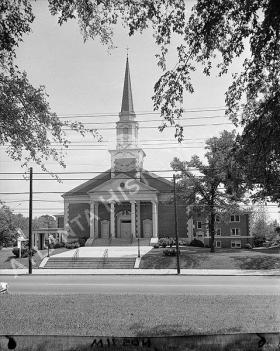 Many of Atlanta’s neighborhoods underwent a racial ‘sea change’ in the decades following World War Two.

The response and reaction by neighborhood churches to that transition is recounted in an honors thesis by Emory University student Preston Hogue entitled, “The Ties That Bind:  White Church Flight in Atlanta from 1955 to 1985” [excerpt below].A conversation with Preston Hogue

The following is excerpted from the introduction to “The Ties that Bind: White Church Flight in Atlanta from 1955 to 1985” by Preston Hogue.  The complete thesis is available online (PDF). 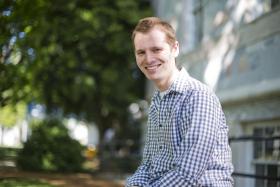 While the experience of each church was unique in its particulars, it is possible to divide the various responses of white churches to neighborhood racial transition into three broad categories: churches that fled, churches that lingered, and churches that stayed. Chapter one describes churches that left almost immediately upon racial transition. In some cases, these churches were initially the main organizing institutions to prevent African Americans from moving into their communities. When these neighborhoods began transitioning despite the efforts of church leaders, the congregations decided to relocate to white neighborhoods, hoping to preserve the racial homogeneity of their churches and communities. Chapter two explores a more ambiguous category of churches that did not try to organize against racial transition. The vast majority of congregants from these churches fled with the rest of the neighborhood. After experiencing rapid declines in membership (and consequently in financial contributions), these churches lingered in their neighborhoods for several years as relics. This category of churches includes a wide range of reactions to racial transition and could also be thought of as ―the churches that did not immediately flee.‖ Although some of them attempted to reach out to new black neighbors in the years following the initial membership decline, all eventually closed their doors. The third chapter examines churches that remained in the transitional communities and welcomed African Americans into their fellowships. Sometimes such churches, like the neighborhoods around them, fully transitioned from white to black, but at least one has maintained a multi-ethnic congregation to the present day.

The dilemma of racial transition met churches at different stages of development, hence the wide variety of responses. This is reflective of whites‘ response to desegregation as a whole. By and large, though, white Christians left the city of Atlanta when it was desegregated, moving to the suburbs where they could maintain white racial homogeneity in their churches, schools, other social spaces, and workplaces. The emphasis on evangelism within such churches, combined with the social expectation that they not interact with African Americans, caused white Atlanta churches to overlook an opportunity to embrace racial reconciliation and social justice. Instead, most of them chose to relocate or disband, furthering an already stark divide between white and black evangelicals that has perpetuated racial inequality not just within the Church but in society. The individuals and congregations that fled Atlanta became complicit in such inequality.

Yet white Protestant church flight in Atlanta was not inevitable. One of the most important contributions of this study is to recover the stories of white southern Protestant ministers who felt the need to share Christ‘s redemptive message across racial divisions, especially given the opportunity in a racially changing neighborhood. When they encountered resistance or apathy from their congregations, determining the proper response to racial transition became a deep moral struggle for them. In almost every example, such ministers failed in their efforts, so historians have often overlooked their struggles. Understanding those struggles and the various responses of congregations to neighborhood racial transition can help white evangelicals today begin to dismantle the spatial divide between black and white churches that deepened during the 1960s and 70s.