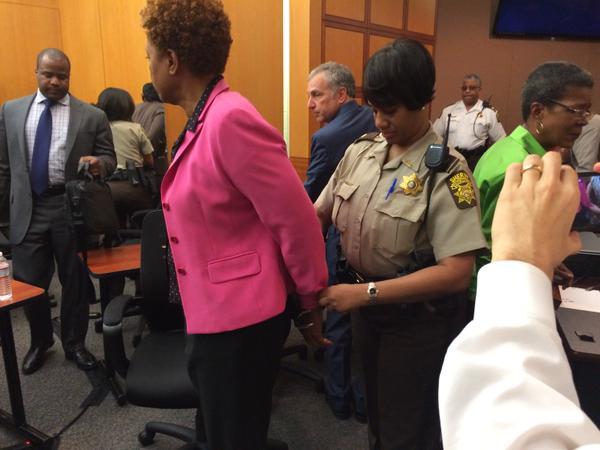 The verdicts in the case were announced Wednesday in a Georgia courtroom. Only one of the 12 educators on trial was acquitted of the racketeering charge.

After reading the verdicts, Judge Jerry Baxter told the jurors he’d miss them.

Despite defense attorney’s objections, Baxter ordered the defendants into custody immediately, with the exception of one, who’s pregnant.

“Now the rubber has met the road here,” he said. “They are convicted felons as far as I’m concerned.” Baxter scheduled sentencing for next week.

Dessa Curb, a former Dobbs Elementary School teacher, was the only defendant who was acquitted.

“It’s really too much I’ve prayed and I believed that this would be my outcome,” Curb said, “And I’m very thankful. Thank god it is over.”Judge Jerry Baxter defends his decision to have 11 APS defendants taken into custody

A grand jury indicted 35 educators in March 2013. Many reached plea agreements with prosecutors. The educators said they faced pressure from supervisors — including former Superintendent Beverly Hall — to inflate students’ scores to show gains in student achievement.

Hall was supposed to be tried along with the others, but her lawyers successfully argued she was too sick to help her own defense. She died last month from complications of breast cancer.