The Atlanta BeltLine is still being built, but it’s already attracting millions of dollars in urban redevelopment. Now Alpharetta says it’s creating its own version of the beltLine in the North Atlanta suburb.

It is called the Alpha loop, according to this week’s Atlanta Business Chronicle – an approximately 8-mile trail that would connect the city’s downtown to big projects including Avalon and the Big Creek Greenway. It would include lighting, bicycle service areas and pocket parks for people to gather.

“We want to get out of our cars and start walking around,” said City Councilman Jason Binders. “Plus, we have our bike share program that we started last year. It’s all an effort to make Alpharetta more pedestrian friendly.”

The Alpha Loop would be built in phases. The first phase would build the trail system for the “Inner Loop,” a roughly 3-mile trail connecting the City Center to and through Avalon, south to Northwinds Parkway to connect to the Big Creek Greenway.

A portion of the Inner Loop is already under construction along Thompson Street, which runs from downtown to Avalon. The trail is being built as part of a three private developments along that street. The first phase could be completed in 24 months. 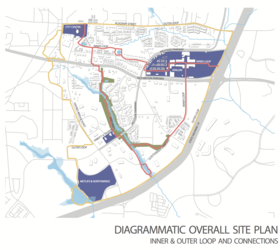 The second phase of the Alpha Loop would add park space and public art along the Inner Loop. And the third phase would construct the trail for the Outer Loop, which would run fi ve miles from the City Center, along Academy Street, south along Ga. 400 to the Northwinds project and back up Haynes Bridge Road.