The mayor of Sandy Springs says it’s not a war on convenience stores. It’s part of a 15-year plan to build a new city center and redevelop Roswell Road.

If you’re looking to build a convenience store in Sandy Springs, you’ll need to hold off until April.

The city has seen an increase in the number of applications and Sandy Springs Mayor Rusty Paul says they don’t all fit with the city’s master plan.

“This is just us calling time-out to allow us to kind of update our ordinances and regulations to make sure that we have the right controls in place,” Paul says. 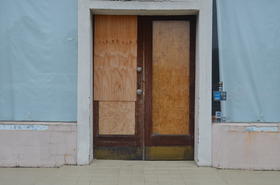 The city wants to control the location and number of convenience stores. Right now, he says Roswell Road is lined with strip malls.

“So what we’re looking for is working with the community, the landowners and development community to figure out how we go about creating a retail center in Sandy Springs that our community will shop and be happy and proud to take their friends and visitors to,” Paul says.

“Not sure exactly what they’re seeking to accomplish in Sandy Springs, other than potentially deciding to pick winners and losers in terms of who can be in their city,” Tudor says.

Sandy Springs has a master plan. It follows the trend of mixed-use planned developments with apartments, restaurants, shops, greenways and parks.

It also includes a brand new City Hall. Eddie’s Automotive is currently at that location. Mike Monetta has been working at Eddie’s for more than three decades.

“It’s always a good idea to improve things, but they should think about some of the businesses that have been here first, you know, where they’re supposed to go to because I don’t think they gave much thought to that,” Monetta says.

The shop now has to relocate, and the city has already bought up business around Eddie’s.