Asian-Americans, including many who say they’ve been ignored for years by politicians in Atlanta’s northern suburbs, could decide the competitive special election for Georgia’s 6th Congressional District.

Tran helped organize a rally for Democratic candidate Jon Ossoff at the Blackstone subdivision in Johns Creek, where residents estimate about two-thirds of the neighborhood is Indian-American.

Kids swam in a nearby pool, and some got their faces painted while about 100 people waited in the shade to hear from Ossoff.

Tran and others at the rally said they couldn’t remember a politician ever hosting an event specifically for Asian-American voters. 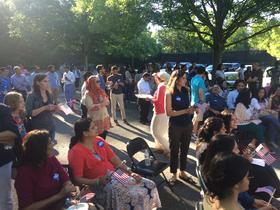 In the 2016 election, Asian-Americans cast about 9 percent of all ballots in the 6th District.

That’s a number big enough to swing the result in the special election runoff on June 20, Tran said.

“We’re not just foreigners; we’re Americans with a voice,” he said.

In Georgia, Tran said, President Donald Trump’s talk about immigration and Muslims has furthered that trend.

At the Ossoff rally, many were immigrants themselves, or have parents who were. They came from Taiwan, Pakistan, India and other countries.

Hena Bukhari said that means the Republican Party is against them.

“The Republicans have sort of made a party that seems like just if you’re white,” she said.

Jay Lin would disagree. He’s an immigrant from Taiwan — and a Republican on the Johns Creek City Council.

Lin admitted the Republican Party hasn’t done a good job of speaking to Asian-Americans, who he tells to think about their votes like this: “They ought to make their decision based on being American first, and Asian-American second, and perhaps Chinese-American or Korean-American, the third,” Lin said.

A spokesperson for 6th District Republican candidate Karen Handel criticized the notion that a campaign would create an event, or “get out the vote” strategy with a specific ethnic group in mind.

“It implies that members of a specific community are different, or even less than, other voters,” said Charlie Harper in an email. “Karen is running an aggressive and inclusive campaign that is targeting all 6th District voters. We are attending community events that represent all segments of our community.  We didn’t call it ‘outreach’ when we visited with the Jewish War Veterans last Sunday nor when we visited the Marietta Greek Festival.”

A spokesperson for Ossoff said his campaign has held “language-specific phone banks” in Korean, Chinese, Vietnamese and Bengali.