It’s one of the most difficult conversations to have within the African-American community, at least for Mandisa Thomas: atheism in black society. 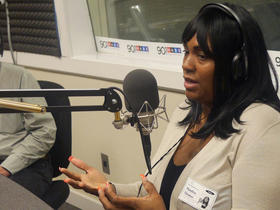 Thomas is the founder and president of the Atlanta-based Black Nonbelievers, Inc. The organization’s motto is “walking by sight, not by faith.”

“Our community has been based around the church and religion. Christianity in particular has had an extreme influence on our community and it has become a sense of tradition, so that to question those beliefs and to somehow challenge the idea that a God doesn’t exist, it is very, very polarizing,” Thomas said during an interview on “A Closer Look.”

“It can be the subject of a difficult conversation for many.”

Thomas, who acknowledged she was not raised in a religious environment, said she’s had a number of these “difficult conversations” over the years.

Thomas believes, historically, religion or Christianity was forced on African-Americans, which she said explains why it’s so difficult for the black community to talk about.

“It becomes like a betrayal, sort of, to even bring it up.”

Thomas has a goal with her organization. “There is a stigma about atheism and non-belief that does need to go away.”

“It becomes important for us to expand on the diversity of the African-American community,” she said.

Black Nonbelievers, Inc. has chapters in at least eight cities, including Chicago, Detroit, Dallas and Charlotte. The nonprofit also has a presence on Facebook and Twitter.