There are pockets of forest all around Atlanta, but some have qualities that make them unique. And now, those green spaces are being recognized with a national designation.

One is a serene, 56-acre forest that lies at the western edge of Atlanta.

The nature preserve, called Herbert Greene, surrounds a section of Utoy Creek. Its landscape is dotted with boulders.

Kathryn Kolb with Eco-Addendum, a group that teaches about nature, stopped at one rocky area.

Kolb pointed to a cluster of plants at the forest floor. 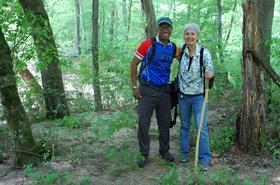 These plants are all native to Georgia. And,  Kolb said, they’re clues to why this place is special.

That means that trees may have been cut here once, she said. But the ground wasn’t disturbed.

“Probably because it was rocky or steep, so it wasn’t farmed,” Kolb said. “And so the soils are intact which means that the forest is able to regenerate itself, the native forest.”

This remnant of original forest is earning this place a spot in the “Old Growth Forest Network” — a national nonprofit.

The recognition mostly creates awareness. But that’s important, according to Bruce Morton, who grew up around Utoy Creek and now serves on the Atlanta Tree Conservation Commission.

“I think awareness allows people to appreciate the beauty in their backyard often times,” he said. “The majority of the canopy in Atlanta is on private property.”

This nature preserve was once private property. Morton helped turn it into a protected space.

More than a dozen other public and private forests around metro Atlanta will join the Old Growth Forest Network during an event organized by Eco-Addendum Tuesday night.