Kids in low income neighborhoods tend to change schools more often than their peers. Studies show that can have a detrimental effect on their education.

This past year in Atlanta, one public school tried to break that trend—by bringing in some lawyers.

Reynolds, a community advocate, is already on the phone, talking to a parent who needs her apartment windows replaced.

“If you can today, call that repair line,” she said. “And please ask for a confirmation number.”

Meanwhile, Jones-Lightsy, an attorney, pulls a stack of documents out of a file cabinet. She said they’re apartment building inspections acquired through an open records request.

“We requested a lot to go back and do comparisons,” Jones-Lightsy said, “what they claimed has been fixed and may not have been fixed, and what has actually been fixed.”

Jones-Lightsy and Reynolds are with the Atlanta Volunteer Lawyers Foundation, a group that provides free legal aid. The two work together to keep kids at Thomasville Heights.

“Last year, Thomasville Heights had a 40 percent turnover rate in their students,” Jones-Lightsy said. “That’s almost half the students were coming in or going out in the course of the year.”

The simple reason is their families were moving. In this low income neighborhood, a lot of moving was happening in one place. 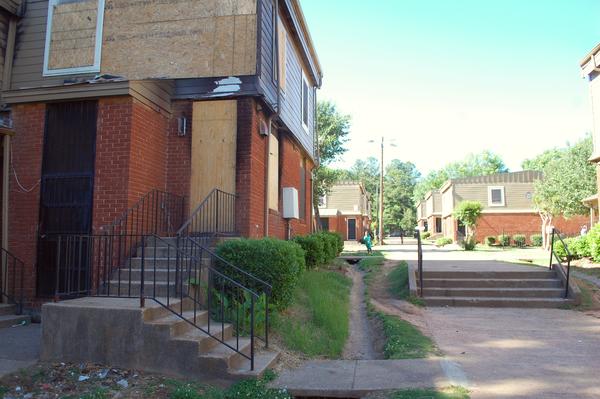 “Thomasville Heights is unique in that right across the street we have this huge subsidized housing apartment complex,” Jones-Lightsy said.

According to Jones-Lightsy and Reynolds, the complex called Forest Cove has a number of issues. They include evictions, overdue repairs and conditions like mold and infestations.

They said those issues make families leave. So Jones-Lightsy and Reynolds are using the tools of the legal system to bring a change.

“We work with seven of the top firms in Atlanta,” Jones-Lightsy said. “The focus is on how do we help these residents stay here and help improve conditions.”

Attorneys send demand letters or even go to court—all pro bono. They say that in more than a dozen cases, including Lagina Brown’s, it’s worked.

“It’s comfortable for me,” said Brown, who lives at Forest Cove with her six kids. “Because say if I have to quit my job for some reason I don’t have to worry about being thrown out.”

Last year, though, she had some trouble. Her air conditioning went out upstairs, the electricity stopped working downstairs and she found bed bugs.

“It was just a horrible process because we really didn’t have nowhere to go,” Brown said. “The house to me was not livable. So basically we were just sleeping wherever we could.”

After the apartment manager sent her an eviction notice, the volunteer lawyers stepped in.

One fought her eviction in court. Later, when repairs still weren’t complete, another attorney followed up.

“I don’t know what he wrote but after the lawyer sent the letter, they got it done the very next day,” Brown said, snapping her finger. “Immediately.”

The attorneys’ help kept Brown at Forest Cove and three of her kids at Thomasville Heights. That stability is what the school wants. 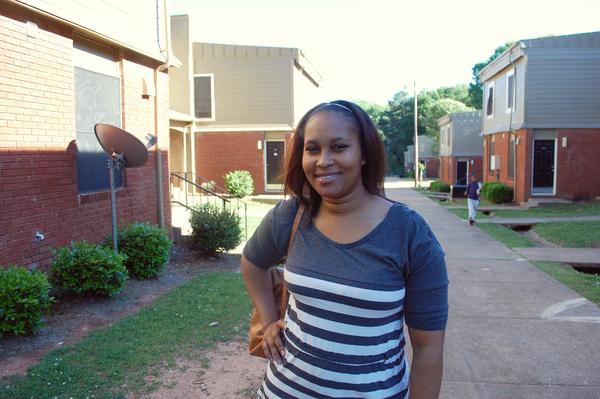 “Kids don’t learn from people who they don’t like or know very well,” Jones said. “So it’s really important that we get them here and they stay.”

A New York University study of Chicago schools found that the less students change schools, the better they focus and perform on tests.

Jones said that the women with the Atlanta Volunteer Lawyers Foundation have also become familiar faces at Thomasville Heights.

The management of Forest Cove, the Columbia Property Group, didn’t respond to requests for comment, but the property owner, Global Ministries Foundation, did.

A spokesperson said it bought the property three years ago and has since spent $3 million on rehabilitation. The apartments at the time did deal with water damage, the spokesperson said, but that was addressed.

The foundation is now planning to sell the property to another company promising more repairs. That sale is pending federal approval.

Jones-Lightsy and Reynolds said they plan to stay in the Thomasville Heights neighborhood and continue working with the families.

“I think it’s important that management feels like all of the tenants at Forest Cove now have a lawyer,” Jones-Lightsy said.

“So we’ll be around,” Reynolds said. “We will be here for the long haul.”

Next year, the Atlanta Volunteer Lawyers Foundation program will expand.