Monday, Atlanta school board chair Courtney English called it a special moment after the board approved the hiring of the district’s new superintendent.

Dr. Meria Carstarphen was the sole finalist for the job. 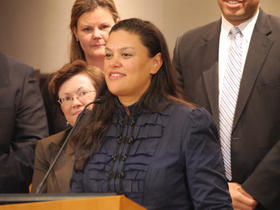 WABE’s Rose Scott reports, Carstarphen is acknowledging the challenges, but also pledging assurances as APS looks to turn the corner from the nation’s largest cheating scandal.

Four years ago then Georgia Governor Sonny Perdue called the district’s internal cheating investigation, “woefully inadequate, both in scope and in depth.”

“We found cheating in forty-four of the 56 schools we examined.”

APS Superintendent Dr. Beverly Hall and her team of executives came under fire and Hall chose not to renew her contract.

In 2011, former Chancellor for the Board of Regents of the University System of Georgia, Erroll Davis was brought in as interim superintendent.

Under Davis, those educators implicated in the state’s cheating probe were fired or chose to leave the district.

APS promised remedial services for those students affected by the cheating.

But authorities were still building cases against some APS educators.

Last year, Dr. Beverly Hall and thirty-four others were indicted on charges related to the cheating scandal.

All were charged with racketeering.

Since then many have taken plea deals, but thirteen remain including Hall and will stand trial in August.

A judge recently granted the trial be delayed while Hall is undergoing enhanced treatment for stage IV breast cancer.

All of that has been a dark cloud that continues to hover over APS.

Flanked by members of the Atlanta Board of Education, the newly hired Superintendent Dr. Meria Carstarphen says she’s determined to bust that cloud.

“I know that it is time to bring the pride back to this school system and you have my commitment to do my part to ensure that the district is really being thoughtful about all the challenges that it has had in the past.”

Regaining that pride means rebuilding relationships with APS teachers and regaining the trust of the community.

And that’s especially true for those current APS students who were affected by the cheating.

For example, those students whose answers sheets, according to authorities, were changed and led to fraudulent test scores.

“Our academic staff and our accountability staff will have to go into the system and find those students and really take a careful look at their transcripts and what have they missed and what they may have gained. I don’t want to make any judgments about what staff has done in the interim over the last four years or so to be able to rectify some of those issues.”

But, Carstarphen says she also wants the good things that APS has continued to do despite the cheating scandal to not go unnoticed.

When she takes over on July 7th, Carstarphen says there are immediate issues that need to be addressed.

And like many districts across the nation, fiscal responsibility is a priority.

“We’ll move swiftly to things like the budget. I know that’s on the table, we’ll have to talk about any changes any adjustments that need to be made between now and the board’s action.”

According to the terms, each year she will be evaluated by the board.

Unlike the contract of former superintendent Dr. Beverly Hall, there are no provisions for performance bonuses.