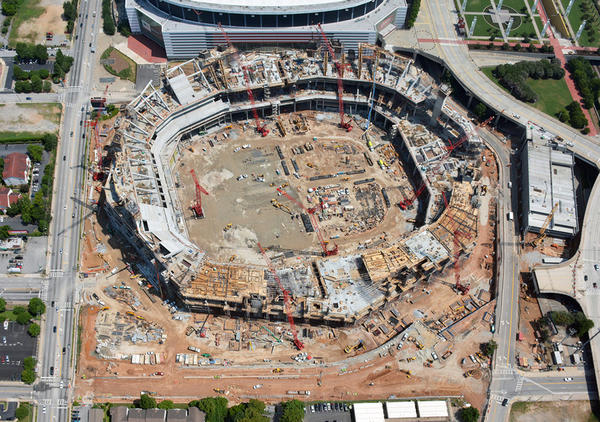 Only a couple of decades after occupying new, state-of-the-art facilities, two of Atlanta’s professional sports teams will be on the move again soon.

Starting in 2017, the Braves and the Falcons will be competing in new stadiums in Cobb County and downtown Atlanta, respectively, and that are being paid for partially with public money.

The Hawks, coming off one of their best seasons ever and under new ownership, also may be looking for a new home court, or to seriously upgrade 17-year-old Philips Arena.

“A Closer Look” is examining the issue of new sports stadiums in Atlanta with a series of interviews this week. “Under Construction” begins with a conversation with journalist Neil deMause.

He is the author of “Field of Schemes: How the Giant Stadium Swindle Turns Public Money Into Private Profit” and maintains a blog with the same name.

A critic of public financing for sports facilities, deMause told hosts Rose Scott and Denis O’Hayer that the economic benefits touted by team owners and public officials are usually overinflated.

He said that while Atlanta “isn’t the worst city” when it comes to being taken advantage of by sports team owners, “it’s nothing to brag about.”

As an example, he cited the original $200 million subsidy announced for the new Atlanta Falcons stadium, which is under construction adjacent to the 23-year-old Georgia Dome.

The new stadium, which features a retractable roof, also will be used by a Major League Soccer expansion franchise operated by Falcons owner Arthur Blank.

As the overall cost for the stadium ─ initially $950 million and now exceeding $1.5 billion ─ has gone up, so have what deMause calls “hidden subsidies.”

These include infrastructure costs, such as a state-funded parking garage. According to his calculations, the public portion of the Falcons stadium project has grown to nearly $600 million.

While team owners in Atlanta haven’t threatened to leave town, something that continues to happen in other cities, deMause said sports owners everywhere realize that “you don’t have to wait 30 to 40 years for a new stadium.”

This is the first installment in WABE’s “Under Construction” series. Other installments in the “Under Construction” series include a history of Atlanta stadium construction, an examination of stadiums and sustainability, a look at the fan experience, and an interview with Cobb Commission Chairman Tim Lee. He brokered a controversial 2013 deal to draw the Braves away from Turner Field and downtown Atlanta, where the team has played since 1966.