This story is part of “Atlanta Remembers: The 1996 Olympics,” WABE’s series on the impact of the 1996 Summer Olympics on Atlanta, 20 years later. For more stories, click here.

The 1996 Summer Olympic Games were a memorable experience for many in Atlanta at the time. Whether they worked the games, played an instrument in the opening ceremony, attended events or were simply watching from afar, Atlantans were involved in the international games at all levels.

As part of its look-back series on the Atlanta Olympics, 20 years later, WABE asked listeners and supporters for their memories of the games.

“My husband and I took the entire 2 weeks off from work so that we could enjoy the Olympics. We went to many sporting and cultural events. I was disappointed that the cultural Olympiad did not receive more mainstream media attention but all the events were well attended. My favorite and lasting memory is of seeing our own ASO perform the night after their triumphant performance at the opening ceremonies. Itzhak Perlman played with them that night. It was the first time we saw him and we were stunned. The ASO was fantastic. We were treated to three encores, including the Olympic theme. We were SO proud of OUR symphony!” 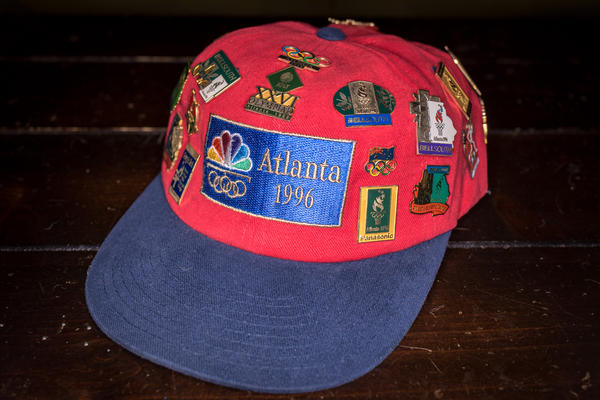 “…On the weekends I was probably more involved with the games than most Atlantans, as I would accompany my dad for occasional after-hours work at the International Broadcast Center, as he worked for BellSouth and was involved with setup operations for the games … So while setup was going heavy but still too early in the summer to have the event locations locked down, I would get to see a bit of the downtown venues from behind the scenes — mostly around the GWCC and at Georgia Tech. These were also good opportunities to trade pins with people working within the venues and games, and I managed to obtain a few possibly unique items.

“As the time for the games quickly approached, I found myself witness to a rare Olympic moment: when the torch approached Georgia I was able to watch one of my friends from Monroe, GA run in the relay and carry the torch. Toward the end of the games I remember walking through Centennial Olympic Park and trading pins — even after the unfortunate bombing that took place. But what I remember most was my father announcing that we would be able to attend the Opening Ceremony, and I vividly remember the excitement of finally seeing the completed stadium. I was inexperienced at the time with a camera but was lent his Yashica 35mm and documented what I could as we approached the stadium and watched the ceremony. Thankfully I captured the Atlanta skyline with the old Fulton County Stadium, and of all the moments of that evening was the lighting of the Olympic cauldron by Muhammad Ali — something fondly recalled by most others who watched the ceremony. 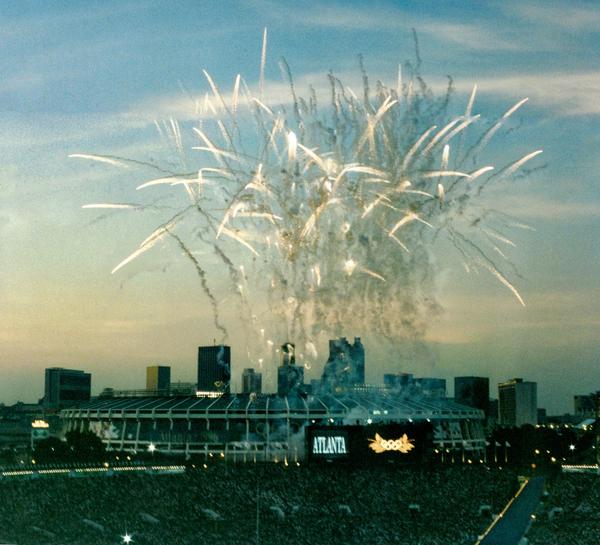 “The remainder of the summer and what transpired beyond the start of the games is unfortunately much of a blur. The endless hours commuting through the city was very much a factor in that, creating the most active summer break of high school. Since then I’ve still been residing in the greater Atlanta area, having gone to college at SPSU (now KSU) and then becoming a resident of Gwinnett County. Recently, I attended an Atlanta Braves game at Turner Field and took the opportunity to get one more glimpse of the changes to the skyline. I climbed to the same section and sat in the same seat as I did beside my dad a distant 20 years prior.” 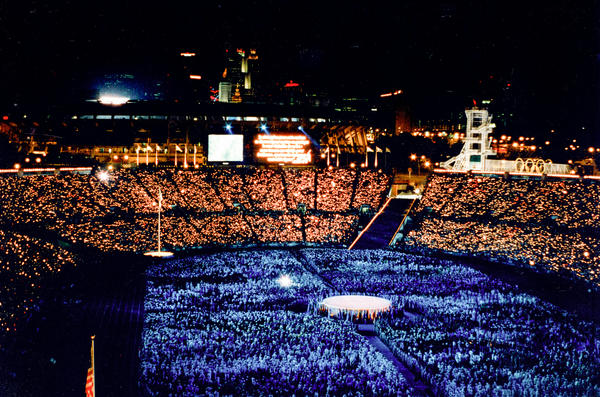 “I was pretty young so my memory isn’t great, but the ’96 Olympics is when I fell in love with outdoor misting stations. It just seemed oppressively hot every day that we attended. My family got to see some archery, equestrian, and USA vs. Japan in baseball. Not understanding at the time that we weren’t allowed to use MLB players and Japan is in fact pretty good at baseball, I was pretty upset that we lost that game. The only other event I remember is seeing Joan Osborne play on the big stage in the park.

“I had a stuffed Izzy that I thought was pretty cool, but when I saw the life-size mascot I was definitely afraid of it.”

“Before the 1996 Olympics….. people had to create and clean the medal award platforms. I was on a team of volunteers who helped to prep the platforms.” 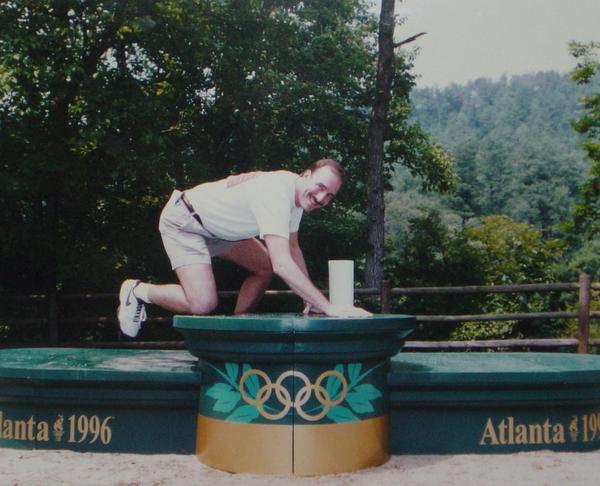 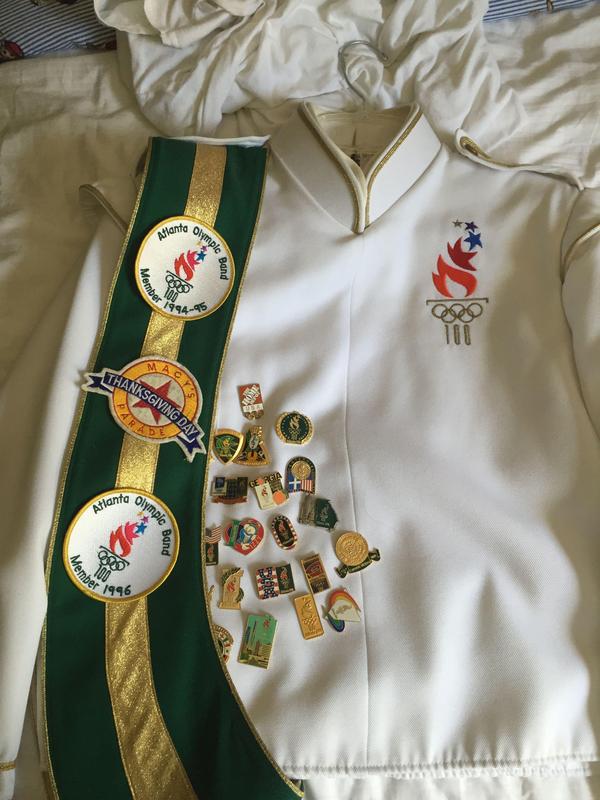 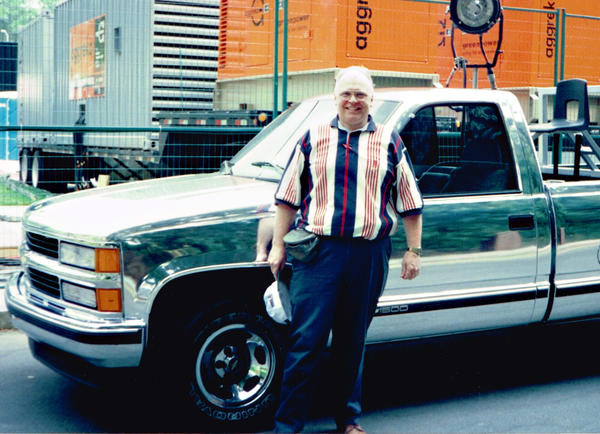 “One day in my office in early 1996 — a rather ordinary day in most respects — a co-worker came rushing in and told me that if I wanted to be in the Olympic Opening Ceremonies themselves, in an on-the-field role, I needed to call a certain number right away to volunteer. No other details except this intriguing, mysterious number. I was given a place and time to assemble with others the following Sunday; again, no other details. At this meeting, I was given a non-disclosure form to sign, and only afterwards were we finally told that we’d be driving ‘silver Chevy pickups’ onto the field during the early stages of the opening. I can guess that all our pulse rates shot way up at that moment, but we’d just signed promises not to tell, and it was AGONY not to be able to call and let someone — anyone know what we’d just fallen into.

“They told us we’d drive onto the field with searchlights sweeping the crowds and a couple of cheerleaders hanging on for dear life as we entered the arena and sped to our assigned yardlines. There were many rehearsals, choreography and cue changes in the ensuing weeks, with the level of excitement building with every practice. But all of that paled compared to the thrill of the actual opening night. On our cue to drive into the stadium, other cast members stood under the stands cheering us in, and we went through our routine with no errors I’m aware of. The drivers were so pumped, we were sitting on our horns at the end and flashing our headlights as we drove out, with an even larger crowd under the stands waiting to cheer us out. It was one of my biggest ‘rushes’ ever.

“Enroute home I called into my favorite radio station and the host asked ‘Did it un-nerve you, knowing that 3 billion people worldwide were listening to the broadcast?’ I answered ‘It was enough to hit my cues and think about the 100,000 plus right there in the stadium. If I’d thought about the rest, I might have frozen on the spot!!!’

“Richard Burton’s King Arthur sang about ‘one brief, shining moment that was known as Camelot.’ And maybe it was. But Arthur never got to drive a Silver Chevy truck in the Olympics Opening Ceremonies, poor fellow. But I did. And I wouldn’t ever trade my ‘moment’ for Arthur’s – ever.” 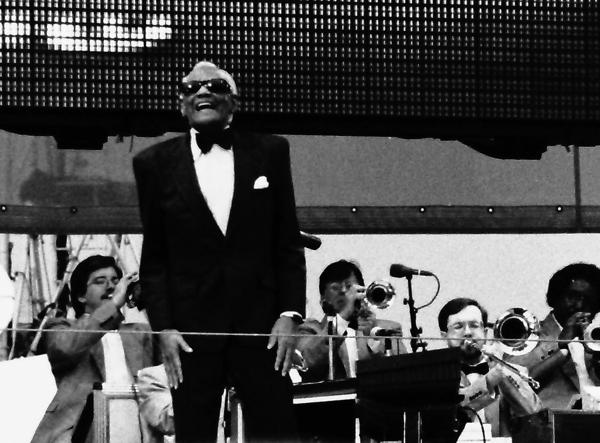 “I had just started to work with legendary music publicist Mark Pucci, and we were lucky enough to have a client there performing the Centennial Park shows; Tish Hinojosa is a wonderful Texas singer/songwriter that is more Spanish sounding than Texan.

“But when Rufus Thomas came up to his old pal Pucci – we stayed. Correction: we HAD to stay.

“The Stax Records Revue was after Tish Rufus Thomas was a hoot – he got a bunch of girls to dance on stage during his song ‘Funky Chicken.’ Ann Peebles and William Bell with the Memphis singers/brass and other musicians. Ann Peebles sung ‘I Can’t Stand The Rain’ and Bell played all the Otis Redding songs along with his own. One of the horn player’s grandsons asked me to marry his grandpa. The drummer didn’t sweat; the fans were climbing all over the railings and walls around the stage and in the trees. I remember looking from backstage to see the crowd – it was oooooh so beautiful. I wished I had brought my camera you know?

“All kinds of people were there every nation – race and all we wanted to do was say hello and smile.

“Then the bomb happened, and my former boss’ office was over off of Maple and across the street from Richard Jewell’s lawyers office. It was so sad to see all that unfold because he was so innocent.

“I remember people singing to [Ray Charles’]  songs – ‘Hit The Road Jack’ – ‘Georgia On My Mind’ – ‘Seven Spanish Angels’ etc… it was hot and muggy but he brought us to our hearts and minds. Music has a way of healing like nothing else. It can enrage us yes; it helps us win a game but what happened prior to the bombing was like being in Disneyland. Nothing could go wrong.” 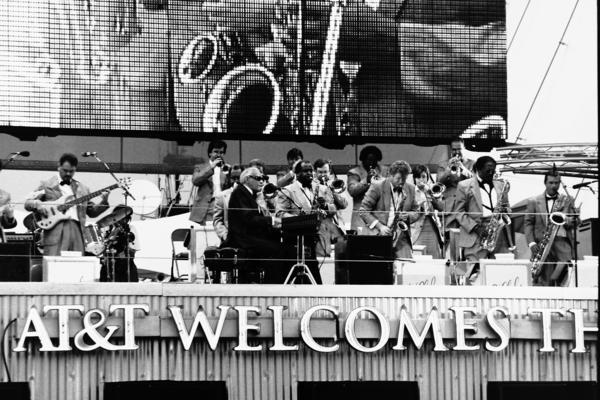 This story will be updated as WABE receives new submissions.