Every time you swipe, tap or insert your card and even pay with your phone, there’s a good chance the transaction will be processed here in Georgia.

That’s because nearly 70 percent of all payment card transactions are processed here, and more than half of U.S. financial technology firms are based in the Atlanta area.

Tino Mantella, president of the Technology Association of Georgia, said you can expect to see more financial tech companies setting up shop in the Atlanta area in 2016.

“Our Fin Tech board has been around for a long time before Fin Tech was cool, and now we’re the payments capital,” Mantella said at TAG’s annual FinTech conference, where more than 500 people gathered to discuss the future of the industry. “A new term is ‘Transaction Alley.’ We’re gaining traction and the combination of talent and capital and innovation is going to get stronger and stronger here.”

According to TAG, Georgia first began to attract financial technology companies in 1987, when state lawmakers lifted caps on credit card interest rates and annual fees of 18% and $12, respectively.

There are now approximately 100 financial technology firms in the Atlanta area, employing more than 300,000 people, according to TAG’s latest report.

Sarah Tourville is a member of the Greater Alpharetta Tech Network’s board of directors. The group is located just off Georgia-400.

“GA-400 is called the payments corridor of the world, I believe,” Tourville said. “You’ve just got so many new, growing, very disruptive technologies coming out to really impact and revolutionize what’s happening in payments.” 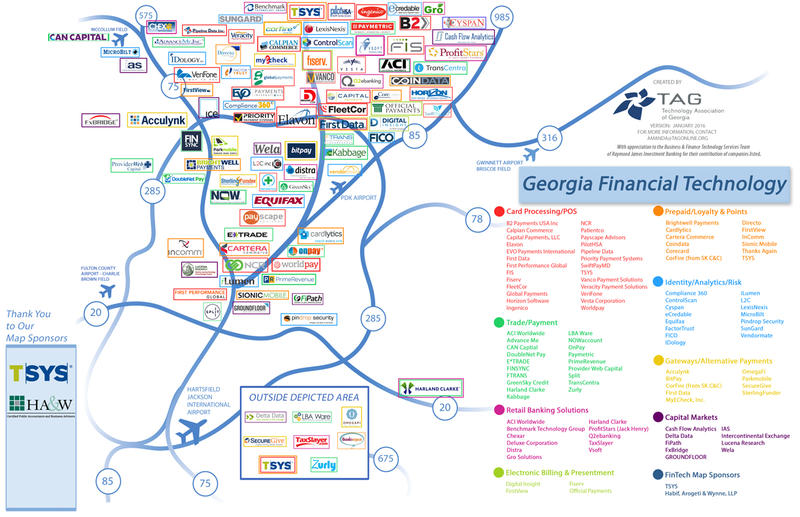 One such “disruptive” technology is the growing use of mobile wallets, which use cellphones instead of credit cards during checkout to make purchases. Spencer White is chief operating officer of Sionic Mobile, based in midtown Atlanta, which operates a free mobile rewards program called ION and promotes mobile wallets.

“You’re seeing hardware is changing with merchants en masse and the need for consumers to change ingrained behaviors from swipe to tap,” White said. “So that opens up the opportunity to interject a new and superior behavior of using mobile to pay and the additional enticement of ION Rewards gives them a value proposition to move in that direction.”

He predicts the introduction of Samsung Pay will lead to greater adoption of mobile wallets this year because it’s not as limited to where it can be accepted and stores are upgrading their payment terminals.

Haskell Garfinkel of the accounting firm PricewaterhouseCoopers, the keynote speaker at TAG’s annual FinTech conference, said “Atlanta has all the right ingredients” for a strong financial technology innovation hub. That’s because the city has strong private-public partnerships, private companies focused on innovation, capital and a strong university system.

Garfinkel said partnering with universities would be key to the industry’s future growth.

“As much as things happen in the labs at companies like Google and Apple and Amazon, they happen even earlier in academic research,” Garfinkel said.

He also noted that companies will need to work more closely to get private dollars for research and development.

Rajesh Koppula founded Lend Lift in 2013. It helps banks and lenders manage their risk and provide financial literacy tools for consumers. It’s also developing a scorecard for banks to use for consumers without access to credit, so banks and lenders can provide these customers with alternative payment options.

“I had the opportunity to start this in New York or outside of the U.S. as well, but I felt like Atlanta is a great place to start,” Koppula said. “It’s got a vibrant Fin Tech community and very good schools.”