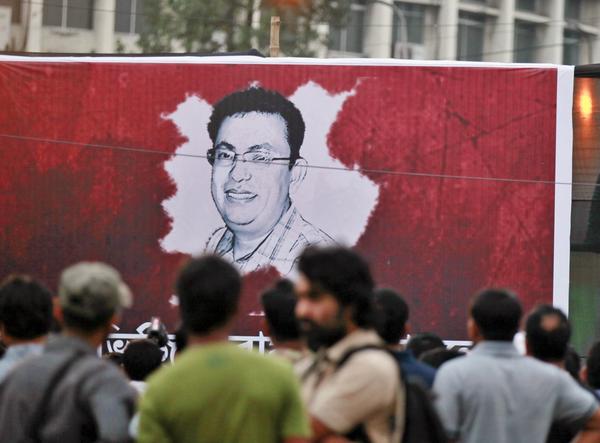 A prominent Bangladeshi-American blogger from the Atlanta area was killed Friday as he and his wife walked through Bangladesh’s capital city, Dhaka.

Avijit Roy, a Bangladeshi-born U.S. citizen, was an advocate of atheism and a prominent voice against religious intolerance in the Bengali community. On Friday, he and his wife, Rafida Ahmed, who’s also a blogger, were attacked on the street with cleavers as they were returning from a book fair at Dakah University. Ahmad was also seriously injured in the attack.As heard on the radio

A previously unknown militant group known as Ansar Bangla-7 claimed responsibility for the attack on Twitter. The group said Roy was the target “because of his crime against Islam.”

Roy ran a popular Bengali blog, Mukto-mona, or Free Thought. On Friday, a message in Bengali posted against a black background read, “We are mourning, but we are not defeated.”

Mohammed Chowdhury, who owns Bengal Store & Halal Meat in Chamblee, says Roy and his wife were some of his best customers. He says Roy would always buy goat meat, spices, treats and his favorite dish, Ilish, the national fish of Bangladesh.

“He’s a very nice guy, very polite, you know, so I was very shocked,” Chowdhury says of Roy’s death. “I couldn’t believe this is what happened.”

Chowdhury says Roy and his wife weren’t very close to the local Bengali community, and that few people knew them.

Vaskar Chanda, a longtime friend of Roy who also followed his blog, says while the couple kept to themselves, they were very active online on Facebook and on Roy’s blog. Chanda says Roy’s biggest audience was back in Bangladesh.

“Whatever he believed, he wrote,” Chanda says, speaking in Bangla. “He believed religion didn’t make everything in this world, science did. And that’s what he was trying to get people to understand.”

In addition to his blog, Roy also contributed to the Center for Inquiry, a U.S.-based nonprofit that works to promote secularism. Michael De Dora, who heads domestic and international policy for the center, had worked closely with Roy in recent years.

“He inspired an entire generation of thinkers and writers and bloggers, young people in Bangladesh who saw him as a kind of father figure,” he says.

De Dora says he wishes Roy would have taken the death threats more seriously, but that he understands why Roy decided to go back to Bangladesh, despite the threats.

“To never be able to go home to his home country and connect to people who believed in him and who he’d inspired would have been a crazy notion to him.”