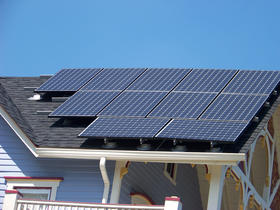 Finding a way to efficiently store electricity has always been the missing link for solar companies. But a new product line from Palo Alto-based Tesla Motors is exciting many in the industry.

Steve Chiariello of Atlanta-based Inman Solar lays out the problem.

“Right now the biggest knock on solar is without batteries, you can basically produce from 9 a.m. to 3 p.m. and on a cloudy day who knows what you’re going to get,” said Chiariello.

Tesla’s new home battery, which is priced at $3,500, can store up to 10 kilowatt-hours of electricity. The average home in Georgia uses about three times that per day, but the battery is scalable, so if you buy more, you get more storage.

“Storage in the house gives you the ability to be off-grid and that’s absolutely a game changer,” said Chiariello.

He says Tesla’s battery is still too expensive for mainstream use but believes it’s a matter of time before the price comes down.

Georgia Public Service Commissioner Tim Echols says the state will take a cautious approach with new battery technology, even though he acknowledges it represents “the next big thing.”

“We’ll let California play with it a while, we’ll let Arizona try it out, we’ll let it come this way and let it get really cheap and then we’ll employ it here, without a subsidy…the way we’ve done solar,” said Echols at an energy event last week.

Georgia long lagged behind in solar, but in the last two to three years, the state has become one of the fastest growing solar markets in the country.