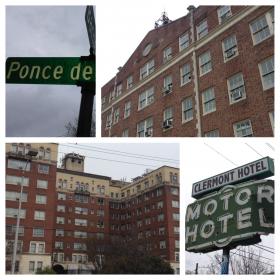 Atlanta is a town with no shortage of folklore and urban legend, and this story deals with one particular tale about the notorious gangster, Al Capone. WABE’s Myke Johns dug into the local lore, with surprising results.

In 2012, I took a walking historical tour of Ponce de Leon Ave. led by Paul Hammock, the Director of Education at the Atlanta Preservation Center. We started at the Beltline and walked toward Moreland Avenue. When we got down to the Briarcliff Summit, the big red brick building with the yellow top floor across the street from the Plaza Theater, Paul dropped a strange story on us.

That was the first time I’d heard of that. Al Capone living in a penthouse apartment in midtown Atlanta? That’s a fun little story, right? Probably a tall tale, but it sounds plausible, given how powerful the notorious gangster was known to be.

The story doesn’t stop there either—there are a number of variations. I spoke to writer Doug Monroe. He’s an editorial contributor to Atlanta Magazine and former senior editor of Creative Loafing. He’s been writing about the South for a long time. Monroe laid out another variation of the story, saying Capone dug tunnels underneath the Clermont. At one point there was a tunnel that connected to the Highland Inn.

Sharon Foster Jones, in her history book Atlanta’s Ponce de Leon Avenue, writes that he was also rumored to have stayed the night at the Woodruff Inn, which once stood on the corner of Ponce and Myrtle Street. Another variation I’ve heard is that Capone used to stay at the Georgian Terrace up on Peachtree. Of course, this is all hearsay—I can’t cite a source for any of this. I heard it from a guy who got it from some person…

Leaving rumor behind for a moment, Amy Bonesteel wrote about Capone’s time here in the October 2005 issue of Atlanta Magazine. According to her account, he arrived via armored train car on May 4th, 1932. He was 33 years old. He was assigned prisoner number 40886. Capone had been sentenced to 11 years to be served in the Atlanta Penitentiary for failure to pay federal income taxes. He would only serve two years here in Atlanta before being transferred to Alcatraz. So where does that leave our urban legend?

“This is a story,” Paul Hammock explains. ”I don’t know if it’s totally true—it’s part of the folklore. And as long as we view it through that context of folklore, it’s malleable. And to tell you the truth, a lot of history is more malleable than people like to realize. It’s true until something else proves it otherwise.”

And with this story, that “something else”…well, that’s the reason we’re talking about this at all. Doug Monroe revealed the truth behind all this myth.

“Last year, the Clermont Hotel went up for sale, and a couple news articles appeared about it and they included the sentence: ‘urban lore has it that Al Capone once lived in the Clermont Hotel.’ And the Associated Press picked it up. And I found it on WSB’s website, and the Atlanta Business Chronicle had it. And my son was laughing about it because about 20 years earlier, he made the story up for fun.”

Doug’s son, Matt Monroe, grew up around the Atlanta area. He currently lives in Philadelphia where he works as a lawyer. I caught up with Matt at the Majestic Diner, in a window booth with a good view of the red brick Briarcliff Summit building across the street.

“You take a look at the building,” he explained, gesturing out the window, “this top floor is like a penthouse, it looks very ornate. And there’s sort of like this block in the middle of the building. Y’know there’s these two windows—it’s kind of out of place, it looks very utilitarian. Looks like it’s perfect for two gunmen.”

…Gunmen to guard Capone, of course. In 1995, Matt was working as a cook at Eats, a restaurant there on Ponce. He would also occasionally bartend at The Local—a bar further up the street. And he would tell people this story, using either the Summit or the Clermont as the location—whichever one happened to be closer.

“…and it got such a good reaction from so many people,” Monroe explained, barely containing his laughter, “it was so satisfying just to see people were actually believing it.”

Maggie White, co-owner of Youngblood Gallery, was friends with Matt back in the mid-‘90s. She said that his lies were always just normal enough to be believable. Sitting in her living room, she explained that she’s probably passed that story on to two or three dozen people.

“And who knows how many people they’ve passed it along to,” White says, “but it’s definitely grown. That story has legs now.”

Could that be all it takes to create an urban legend? One guy telling some story to friends, plus fifteen years, give or take? I pressed Matt on the history. I told him about Capone being imprisoned here in 1932…he gave me a blank look. He said he didn’t know about that.

“So you weren’t aware about any other stories about Al Capone floating around before you told the story,” I pressed.

He could have been playing with me. To be honest, I don’t really mind. The story he allegedly made up out of whole cloth and the story behind that story are fun and ultimately harmless. They also happen to be a lot more fantastic than the truth.

In Amy Bonesteel’s Atlanta Magazine article, she describes how inside the Atlanta Penitentiary, Capone was a quiet guy who read sports magazines and letters from his family. He actually became a victim of thugs inside the prison who assumed he had money and were determined to extort it by threatening him. He did start one fight in his cell—the night the guards came to transfer him to Alcatraz. He attacked a guard, shouting obscenities…but only after being told he’d have to leave his family photos behind.

It’s a picture quite far removed from the image of a carefree Capone, living in penthouses and frequenting local bars. Matt Monroe says his story adds a kind of mythical element to these places that you walk every day. Sitting there at the Majestic, he looks out onto Ponce.

“I mean, if you go drink at the Righteous Room, you look across the street, that’s the coolest thing if you think that you’re in the same place where Al Capone was at that point, 70 years ago. And to lose that is to lose a little bit of the magic.”

And really, which would you rather keep alive? The broken gangster stuffed in a cell with seven other cons, or the larger-than-life celebrity kingpin, out free and roaming the streets and tunnels of Atlanta?

Doug Monroe wrote about his son’s story in the April 2013 issue of Atlanta Magazine.