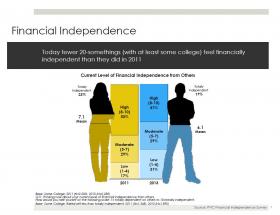 The number of new college graduates who claim to be “totally independent” financially is down 26% compared to 2011.

That’s according to a national poll from the PNC Financial Services Group.

This lack of financial security among the younger population is being dubbed the “Failure to Launch” syndrome, and it can have long-term effects.

It's summer and that means there a lot of new college graduates pounding the pavement looking for a place to pick up a paycheck. WABE's John Lorinc reports.

“It can delay the decision to own a home.  It also affects decisions to save for retirement,” says Mekael Teshome, an economist at PNC.

Analysts and officials say Atlanta’s job market is improving, but there are a lot of people, of all ages, looking for work, and it’s important for job-seekers to be flexible.

“People want to know, can you do the job, or can you be trained to the job as maybe a new graduate.  But, also, are you likeable?  Are you going to fit in?  Are you going to be easy to work with?” says Debbie Brown, the president of D&B Consulting, Inc.

Ian Cramer sent out dozens of applications after getting his graduate degree from an Ohio college.  He says he sent out nearly 100 applications, but only got one offer, from a business in Douglasville, GA.

That’s where he works now, and he advises new college grads to never slow down.

But, for some, a college degree doesn’t translate into success in the job market.

Sam Whited was studying mechanical engineering and physics at Georgia Tech.  When the right position came, he dropped out of school.

He’s not sure if he’ll go back to get his degree.

“You know, it’s a possibility, eventually.  But I was offered a good job, I’m making enough money to pay off all the loans and I just don’t really think it’s worth it anymore.”

Julia Fenner graduates from Kennesaw State next week.  She’s excited about what the future may hold.

“I really want it to be the right thing and I don’t want to get stuck in a 9-to-5 that I really get exhausted of quickly, so I am nervous about that happening.

The Georgia Department of Labor reports Metro Atlanta’s unemployment rate for June was 8.9%.  That’s up slightly from May, but down nearly half-a-point from June 2012.

We put out a call on Facebook and Twitter asking recent college graduates to contact us with their experiences out in the job market.  Here are some additional comments that we received.

Mary graduated two years ago with a humanities degree and is currently holding two part-time positions – one paid and the other an unpaid internship:

The transition to full time work has been difficult as very few places are hiring new full time staff anymore as both locations that I work have reduced hours for staff from full time to part time. I am lucky in one regard to be doing something in my field but I am one of the thousands of new grads who are waiting for a chance to get my foot in the door and receive an income that I can fully support myself. With student loans, rent, and car payment I am wondering when the breaking point will be to give up on hopes of getting a job in my field or just taking any job that will pay a decent income.

Mary also had an interesting observation about taking that unpaid internship:

That steady income [from the paid position] has allowed me to take on an unpaid internship because lets face it the only way to get your foot in the door anymore is to take on unpaid work.

Lynn says she and her fiancé moved to Atlanta from New Orleans about a year ago.  She says that despite applying for lots of full-time positions, the only work she was able to find has been a series of part-time jobs.  Lynn says she became a ”1099 employee,” referring to the IRS form used by contractors for their taxes (employers usually do not pay any taxes for their contractors).  Lynn had some things to say about that:

I eventually got a job at a mom and pop software company. I started at $15 an hour as a telemarketer. Oh and I was also a 1099 employee. I received a few other job offers as a 1099 employee. I never knew about 1099 employment until I came to Atlanta. It seems to be a way that employers can cut corners and labor costs.

Last month, Lynn says she accepted one of three job offers she received (“Of course when it rains it pours”) and is also working to earn a paralegal certificate from Emory University.  She’s happy to have her new job, even if it is part-time, but the difficulties of looking for a full-time job remain:

The process is very discouraging. My clothes are getting worn, and I am usually pretty embarrassed by the way I look when I go into interviews. I feel very shabby. My car is looking shabby, when I roll up to a building I try to park away from the entrance of the building so that nobody can hear the sounds it makes.

Lynn says she dreams of the day when she won’t be a 1099 employee, then adds, “Or if I am, I will be making a higher hourly rate.”