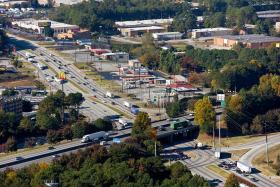 Fulton Industrial Boulevard off I-20 is a busy thoroughfare with a seedy reputation. Crime is a persistent issue.

As part of plans to revitalize the area, county and business leaders are teaming up to launch a so-called community court next month.

Past the strip clubs and rundown motels, it’s easy to find locals with stories about cars broken-into, public drug-use, and vandalism.

Connie Vann runs a staffing company along the strip. She’s been working in the area for 20 years and had this memory of a run-in with a prostitute.

“She came out of the woods in front of my car and she pulled her blouse up and asked me if I wanted some of that,” said Vann. “I shook my head and she went back in the woods. That really happened.”

Vann says in all seriousness companies have fled over the years due to the area’s issues.

“I want more businesses in this area and not have any of them leaving so it does affect our business tremendously,” said Vann.

The new community court is aimed at repeat nonviolent offenders – people who routinely get caught doing things like loitering, trespassing, and doing drugs.

Douglas Ammar, who heads the Georgia Justice Project, a legal nonprofit which represents low-income clients, says community courts are different than normal courts because they ask a key question.

“What can we do? What can the community do? What can a judge do so that you don’t end up back here next week again doing the same thing,” said Ammar.

That typically means help with mental health issues and addiction, GED classes, and other support services.

Ammar is encouraged that the court is coming to Fulton Industrial. The only other similar community court in the area is administered in the city of Atlanta. He says they represent a welcome and growing trend in the legal system.

“Even if you have put someone in treatment once or twice or three times or five times that’s often cheaper than having them go back to jail again, again and again,” said Ammar.

The court is set to begin hearing cases for nonviolent offenders November 12.