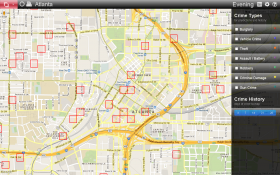 At least two law enforcement agencies in metro Atlanta are using a new program aimed at predicting where crime will happen. But while Norcross and Atlanta’s police departments are getting behind the program known as PredPol, at least one expert says there could be problems.As heard on the radio

Norcross Lt. Bill Grogan says since rolling out PredPol two months ago, the program has been a success.

“I think we’re sold on it,” Grogan said. “We’re pretty impressed with the information that we’re getting.”

What Grogan is getting is basically a Google map of Norcross dotted with red boxes. The boxes highlight where crimes are predicted to happen. PredPol, which was developed by the Los Angeles Police Department and UCLA, creates those boxes through an algorithm that analyzes crime data (type of crime, location, time of day, weather conditions, etc).

For example, a Norcross police officer was patrolling a PredPol red box and picked up a man with outstanding warrants from another state.

“In her [the officer’s] words, she spent more time, she was more vigilant than she would have been,” Grogan said.

Andrew Ferguson is an associate law professor at the University of the District of Columbia.

Andrew Ferguson, an associate law professor at the University of the District of Columbia, says those kinds of arrests could violate constitutional rights against unlawful search and seizure.

“Without the 911 call, they say he was in this area, and he looked suspicious, and the weight you give to the algorithm is critically important,” Ferguson says.

Grogan says the area the man was picked up in is known as a high crime area, and he added that PredPol doesn’t replace police work.

But Ferguson says the program raises questions about how much police departments should depend on PredPol.

“People need to ask the hard questions of where does this data come from, is it accurate, is it transparent, how do we make sure that it’s being used in a way that is, you know, without racial or socioeconomic concerns,” Ferguson says.

Ferguson says the program is too new to answer those questions.

“If those issues are satisfied, then it’s probably a net positive to be able to use those technologies,” Ferguson says.

The Atlanta Police Department is scheduled to roll out PredPol department-wide in late October. It’s currently in a 90-day trial period.